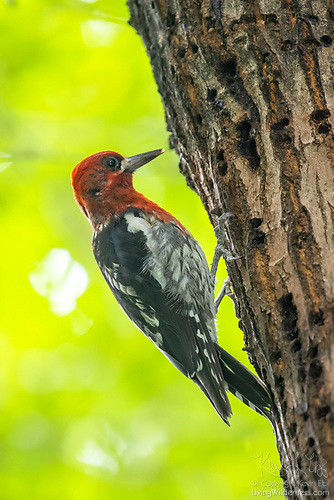 It took a couple of weeks for me to get another chance with the sapsucker, but it did come back — right as I was pouring glass into the recycling bin. I chuckled as it positioned itself on the trunk of the elm, just above my eye-level. But then why would a noisy bird be bothered by my racket?

The first time I photographed the sapsucker it was largely frozen in place, watching me as I was watching it. This time it didn’t even acknowledge me. That seems ideal but it made photography challenging. The bird worked several sap wells at the same time. One second it was clearly in view, the next it was on the other side of the tree. The impenetrably thick branches made it hard to follow the action.

Even though the bird seemed OK with me and my camera, I limited my photo session to 15 minutes. I got a few shots, told the bird that I hoped to see it later, and went back into the house.

Over the next few days, I began to realize the sapsucker had a routine. It tended to show up around 2:30 every afternoon and peck at the tree until just before sunset. So the bird and I got into a routine. I would venture out at around 6 when the sunlight came from a particularly dramatic angle. We had our usual one-way conversation. I delivered a calming monologue as I took my pictures. The bird dutifully pecked away at patches of the trunk that it deemed unproductive.

These sessions, however, weren’t just time with the sapsucker. They were also time with the elm. And I began to see that I couldn’t ignore it any longer.

There’s a saying that you can either do something fast or you can do it well. It’s usually uttered in an often futile attempt to discourage shoddy workmanship, but it’s also an apt description of how trees grow. With the elm unconstrained, it exploded with dozens and dozens of new branches, each racing with each other in a competition for precious sunlight. The faster the growth, the weaker the wood. Even a breeze could potentially break brittle branches. Several had already snapped off and were weighing down the telephone wire into the house.

I pruned the tree early in the morning when I knew I wouldn’t bother the sapsucker, but it didn’t matter. The day I started working on the tree, the sapsucker stopped.