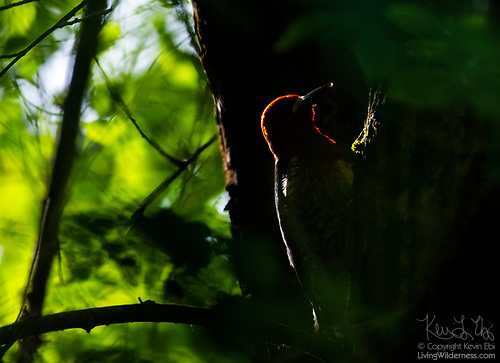 For all the times I talked to the sapsucker, it never talked back, so I’ll never know if it was mad at me for pruning the tree. If it was mad, however, it was mad for only a month. I was on my way out to the car when I was nearly blinded by the glowing light reflecting from its vibrant head. “I’m glad you’re back,” I told it and I went inside to fetch my camera.

I had to find a new position to take advantage of the sunlight, which was now more from the south than from the west. But that wasn’t the only thing that was different. For the first time, the bird seemed interested in me.

It was on the opposite side of the tree as I was getting the camera ready. I figured it would hop around at some point, which it did almost the moment I finished setting the exposure. And not only did it come into clear view, it stopped as if to pose. It looked at me. I snapped a burst of photos, my camera rattling like a mechanical woodpecker. Then the bird turned its head to the side. I snapped another burst.

As I stepped back from the camera to review the images on the screen, the sapsucker resumed tending its wells. I had an image that I liked, but I wanted to try a different angle. Maybe I could get a better image with side lighting rather than full sun?

I moved the camera about 25 feet and the bird followed, hopping around to be in the new scene. We repeated the exercise. Look at me. Click. Look away. Click.

A spark of creativity came next. What if I positioned the sapsucker between me and the sun? The bird would be mostly in silhouette, but it would be surrounded by a ring of light. The image would have minimal color, but much more impact. My previous pictures were more documentary; this would be more dramatic.

The bird resumed pecking the tree while I moved my gear again. When I was ready, it gave me another pose. I knew I had a winner when I saw the image briefly flash on the screen as my camera was saving it to the memory card. “Thank you,” I told it. “You were incredible.”

This was our last extended photography session. It was going to be impossible to top it and I didn’t want to distract the sapsucker from its work. When we would see each other over the coming months, I’d always stop to say, “hi.” I might even take a picture or two, but I mostly left it to work unimpeded.

As fall set in, the sapsucker would vanish for a month or two at a time. I last saw it a couple days after New Year’s. I don’t need any more photos, but I check every few days to see if it has returned.

And for the first time since we moved into this house, I’m hoping that the hideous elm is with us for many years to come, too. I’m working on it.