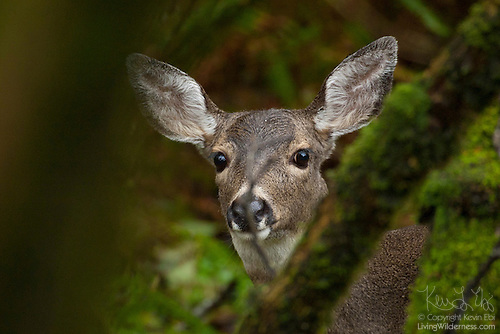 It’s now June. The flowering currant stopped flowering a month and a half ago, but I still see the hummingbird occasionally feeding on the flowers of some overgrown blackberries that I need to clear. As the lockdown orders drag on, photography work is giving way to yard work.

First up: mowing the lawn. As I yanked the cord to fire up the lawnmower, a bird flew by, missing my head by just a few feet. It was the red-breasted sapsucker! I saw the bird and the irony. I had spent weeks sneaking around the tree, but my first encounter with it came as I was making so much noise I needed hearing protection.

It pecked away at a patch of bark about 9 feet up. It was still in the same spot after I ducked into the house and returned with my camera. I got a few photos — nothing spectacular — thanked it for its time and walked away. Some people may find this crazy, but when I’m photographing an animal that’s clearly aware of my presence, I usually talk to it. It’s the opposite of what most wildlife photographers do.

When I work in national parks or other wildlife hotspots, I frequently run into photographers in head-to-toe camouflage. Most of the time their equipment is wrapped in camo, too. Maybe that fools some animals, but I’m happiest when the creature knows I’m there and doesn’t care. I think talking to them helps.

To any animal, the gear required to take a photo must be a scary sight. The sound of the camera’s shutter is an aggressive rat-a-tat-tat. My biggest lens weighs more than 13 pounds and has an outer glass element that’s nearly the diameter of a dinner plate. It says “Canon,” but it looks and sounds more like a cannon.

Chatting with the wildlife is an approach I adopted nearly 20 years ago when I accidentally surprised a small group of deer in old growth forest on the Washington coast. I had just stepped off the trail to photograph the texture of the Douglas fir trunks when I felt dozens of eyes on me. I looked up and saw deer on high alert, their tails pointed like exclamation marks. In soothing tones, I apologized. The doe closest to me looked me in the eyes then lowered her head and resumed grazing. The others followed her lead.

I wanted the sapsucker to feel just as safe here. I hoped it would come back.