The legend of the Milky Way 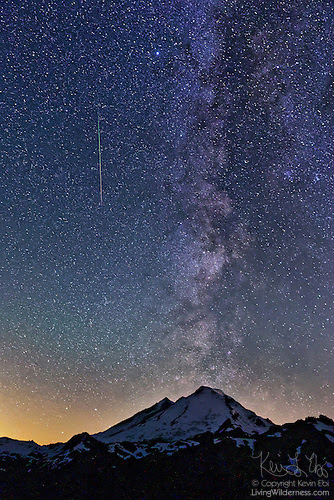 It used to be that once the sun went down, the sky was completely black. But that ended one night when the biggest dog ever decided to steal a snack from some farmers.

The couple lived in what they considered a very safe and trusting village. They left the cornmeal out after grinding it. Nobody would steal it. But when they awoke one morning, it was gone. In its place, a paw print from a huge dog, bigger than any dog they had ever seen.

The old farmers didn’t know what to do. They tried following the tracks for a while, but it was difficult. Such a big dog had a huge stride and the distance between tracks made them difficult to follow. So they gave up. They hoped the theft was a one-time occurrence.

The following morning the cornmeal was gone yet again. This time they called a village meeting. Everybody came. After much discussion they hatched a plan.

That night, when the dog showed up again and started gulping down the cornmeal, everybody in the village jumped out and formed a big circle around the dog. Some banged on pots. Others lit torches.

The dog didn’t know what to do. He tried running around in circles, looking for a path to break through the chain of villagers. Scared, he leapt up into the sky, soaring over mountains.

He fled so fast, he didn’t have time to swallow the cornmeal. Grains streaked from his mouth as he bolted across the sky. As each grain came to rest in the sky, it became a star.

The biggest concentration of the grains was in a straight line across the night sky — the path the dog took. Today, that bright line is known as the Milky Way, but the Cherokee call it Gil' LiUtsun'yi — “the place where the dog ran.”

— Based on a Cherokee legend