Portrait of a barred owl 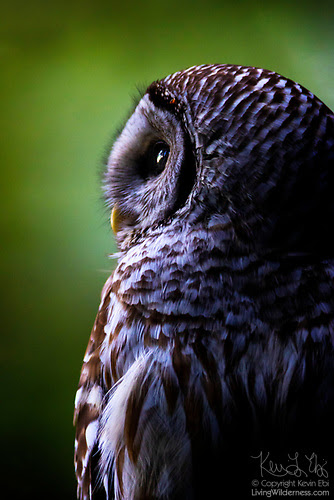 While it can be incredibly exciting to photograph in a new place or to spend time with an animal you’ve never photographed before, I also enjoy revisiting old subjects. It’s allowed me to make some of my more creative images. It’s that familiarity that allowed me to make this portrait of a barred owl.

If this had been the first I had ever seen a barred owl, I would put tremendous pressure on myself to get at least one usable picture. That would mean playing it safe. I couldn’t afford to take compositional risks to produce a more artistic image.

But this wasn’t my first time with a barred owl. I had probably a half-dozen solid images in my archives. If I got an image this evening, fine. If not, I got some exercise. So I decided to try to create something special.

In my work, there are two kinds of images. The first are descriptive images. They are images that illustrate a habitat, an animal behavior, or an environmental process. They explain how something works or why an animal does what it does. They are the works that run in educational books or magazines. The first time I photograph a subject, these are usually the type of images I try to make.

But I also get to create what I think of as interpretive images. They’re images that don’t carry the baggage of trying to show why something is. They’re intended to help you feel something. They’re emotional. They are the works that show up on gallery walls or in my art books. And on this evening, I wanted to treat the owl like a work of art.

This owl was a very cooperative subject. It would perch somewhere for about 15 minutes, fly off to hunt, and then return to a different tree, still close to where I was set up. I got to see it in many different positions and lighting conditions. I got some nice images, but I still wanted to create something different.

I thought about how this owl was part of a family that produced two owlets this year. This family was no longer using the nest, but they were traveling together. The youngest owl that I saw may have only been flying for a week or so.

I got the idea to create a portrait, such as the kind you would have made of a graduating high school senior. By using my most powerful lens, I was able to fill the image with about three-quarters of the owl, which is a common human portrait type.

Just before sunset, the light level was low. It mainly came from the left, but the forest also diffused the light somewhat, again, not unlike the lighting one might use in a portrait session. I underexposed the image slightly to deepen the shadows and use a contrast adjustment to restore the brightness on the owl’s face.

I think the result is a dramatic, emotional take on a familiar subject. And for me, it’s something that happens only if you try to find wonder even in things you know well.