The stray dogs of Puerto Rico 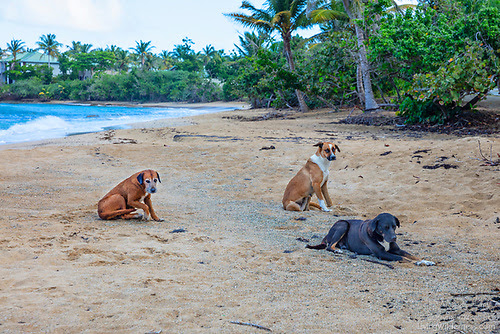 These dogs don’t look happy — and they’re not. While they’re on one of the most beautiful Caribbean beaches on the island of Vieques, they’re among the 200,000 dogs in Puerto Rico that were abandoned or abused and left to fend for themselves.

To be sure, the number of stray dogs, known locally as satos, is not by any means a new problem for Puerto Rico. Culture plays a significant role. In the mainland U.S., dogs are frequently thought of as family members. In Puerto Rico, they are usually thought of as animals.

But it is a problem that has gotten worse since Hurricane Maria ravaged the island in September 2017. A significant number of residents gave up and left for good, leaving their animals behind.

The New York Times has a deeper look at the conditions today on Vieques, where, for example, the hospital still hasn’t been reopened. It was supposed to be a top priority for the recovery effort. They’re still waiting for funding.

Puerto Rico may not be a state, but it is part of the United States. By some measures, hurricane ravaged areas on the mainland U.S. have gotten 30 times the funding that has been sent to Puerto Rico. We make the issue out to be more complicated than it really is. The people need help and it seems wrong to punish them in their time of need for the misdeeds of their corrupt politicians.

I could post pictures of destruction, but I think the eyes of these dogs speak louder.

(I photographed Vieques in December and did find some incredible beauty. Read previous posts about the gorgeous bioluminescent bay, which is brighter than ever, and its wildlife refuge, which spans half the island. The people there rely on tourism and the tourist areas are in fairly good shape.)

Thanks for coming up with such a great content and issue. I know a lot of people are not aware of these stray dogs and their sufferings. Being a photographer, you did a great job. I loved it how you said that, I could post pictures of destruction, but I think the eyes of these dogs speak louder.