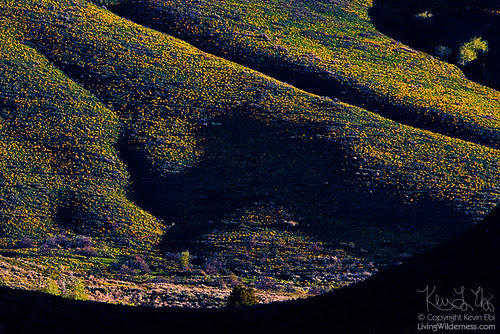 Balsamroot is a member of the sunflower family, so it seemed only appropriate to photograph a hillside of the golden flowers in the first light of day. I also wanted to photograph the wildflowers in a way that illustrated how they can absolutely dominate the landscape for a couple of weeks in the early spring.

Arrowleaf balsamroot, known scientifically as Balsamorhiza sagittate, is found across the high desert of western North America. Like the Traveling Wilburys hit song, it thrives in a “Cold Dry Place.” Its range stretches from the eastern slopes of the Cascade and Sierra Nevada mountains to Colorado and the Dakotas. 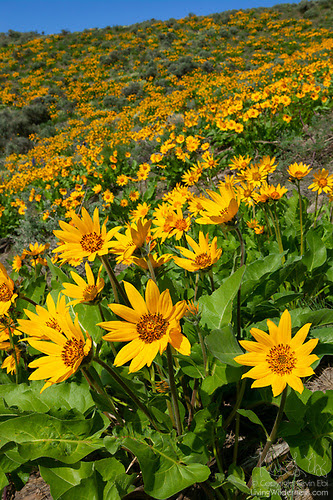 My first experience photographing balsamroot came in 2004 on land the Nature Conservancy helped to protect near Quincy, Washington. Very little of Eastern Washington is in its native state. Agriculture and hydroelectric dams have reshaped the land and the life that lives on it. The protected land, known as the Beezley Hills, is home to a number of rare plants, but it largely turns golden in April when the balsamroot blooms.

When I recently got another chance to photograph balsamroot in the Methow Valley near Winthrop, Washington, I decided to try a different approach. All of the hills around me were golden. And from a distance, the blooms look like specks of gold, rather than identifiable flowers.

The 600mm lens is not normally a landscape lens. The powerful lens looks like a telescope and is normally used for photographing skittish wildlife. But I trained that lens on a beautiful patch of hillside that was about a mile away. The unusual choice allowed me to highlight the dots of gold and compress the view to emphasize the dramatic shadows on a rolling hill.