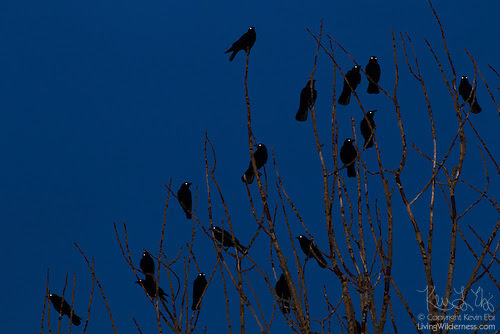 This is the time of year when crows — some 15,000 of them — return to a roost not far from my home. Each night, as the sun sets, they return all at once.

Many people, however, don’t see it that way. Over the six months that I worked to turn their nightly return into photographic art, it was a very rare occurrence to meet anyone who appreciated the scene even a fraction of what I did.

Most rushed past the trees that were filled with crows. Some complained about the noise. A few carried umbrellas to shield themselves from the bombs dropped from the birds’ behinds. (In my time on this project, I was hit only once, and I tried each night to get under as many birds as possible.)

Less than 200 years ago, it was impossible for most people to imagine a life without passenger pigeons. Perhaps a billion of them filled the skies! A century later, they were all gone. Forever.

Unlike the passenger pigeon, the crows aren’t threatened by over hunting, but they do face other threats. West Nile Virus, for one. And for other reasons, the Hawaiian crow is already extinct in the wild.

While we may not need to launch a conservation campaign for the crows, I do think we should appreciate the shows they put on, like the one I documented in Bothell, Washington. Because as we’ve seen before, there’s no guarantee it will still be playing 100 years from now.

(This blog post was adapted from the preface to my new project, In For The Night, which documents the nightly arrival of 15,000 crows. Learn about the ebook, watch a 3-minute video of their night-time approach and get information about an exhibit of images from the project at the In For The Night website.)