The story behind Waterfalls at the Continental Divide

Up close, these waterfalls appear to be among the most majestic in North America, but they don’t even have names. That’s because they only flow for a few weeks each year. In the high meadows of Glacier National Park, Montana, timing is everything.

My passion for the wilderness came before my passion for photography. I took up photography as a way of showing others the incredible things — the wonderful shows of dramatic lighting, the special connections with animals — that I experienced in the wild. More than just a pretty picture, this image really illustrates what got me excited about photography in the first place.

In the early summer, not far from the Continental Divide, several creeks combine in a vast field above Logan Pass. Two weeks before I captured this image, the waterfalls were buried under several feet of snow. I could hear some water flowing, but I couldn’t see it.

As I hiked out, the field of snow had been replaced by a field of avalanche lilies. The delicate yellow flowers are always the first to pop up in summer, usually within days of the snow melting.

Arriving at the crest of the largest waterfall, I knew the image that I wanted to make. Wispy cirrus clouds on the other side of the pass were beginning to take on the faintest hint of red within the hour before sunrise. I wanted them in the image to help mirror the deep red of the rock.

I also wanted to be able to see each of the waterfalls in the gorge and for each to progressively lead your eye up the image. There was only one vantage point that was going to make that possible: I had to climb in the ice-cold creek. The snow at the site of the falls may have been gone, but the creeks were fed by the remaining snow melting a few hundred feet above me.

It took the widest setting of my wide-angle zoom lens to fit the entire scene into the frame. I also needed a graduated neutral density filter to balance the bright sky with the darker ground. Cameras can capture relatively little light-to-dark range. The rectangular filter is dark on one end — like sunglasses — and clear on the other. I placed the transition line over the mountains so that the amount of light the camera was getting from the clouds was roughly the same as the intensity of the light on the highlights of the water. 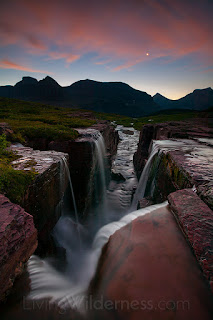 From first hint of pink to the end of the most intense red, the light show lasted just over a half hour — and this image represents 4 seconds of that. The first of the 44 frames I shot that morning include the crescent moon about 15-degrees above the horizon. A half-dozen shots later, the moon had dipped behind the clouds, never to reappear. While I’m a sucker for any image that incorporates the moon, for me, the power of this image is the color red, so I was willing to lose the moon for the more intense color that built almost continuously over my session at the falls. Watching such a spectacular sunrise play out over such a stunningly beautiful landscape is exhilarating and I wanted the image convey that feeling.

In the high country, nature plays out in fast-forward. A couple weeks after I captured this image, the waterfalls slowed to a trickle. They dried out shortly after that. But that’s not the only change.

When I photographed this scene more than a decade ago, you could hike out to the creek as long as you were very careful not to trample the delicate flowers. But over the years, the number of photographers visiting this tiny patch of spectacular landscape has exploded, overwhelming the fragile site. Park managers have now completely closed off the area. People can change the land as much as — or even more than — the weather and seasons.

Waterfalls at the Continental Divide is on display through December 24, 2016, at the G2 Gallery in Venice, California, part of the 100 Years of National Park exhibit.

The image is also featured in Kevin Ebi’s latest book, Our Land, which is a tribute to the National Park Service centennial. The book is available in both hardcover and as an electronic book.