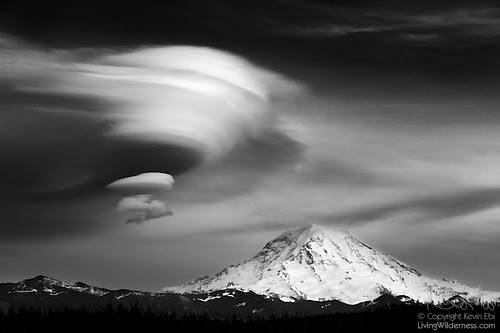 It was the largest lenticular cloud I had ever seen. Lenticular clouds, which look a bit like flying saucers, hover around Mount Rainier several times a year, but this one seemed to be as large as the mountain itself.

I spotted it while I was driving home to Bonney Lake, a city about an hour northwest of the volcano. I didn’t have my camera with me. It was a few hours before sunset anyway. A lenticular cloud in an image is always great. One turned fiery red by the setting sun is even better.

I drove straight home and worked for a bit. Then, about an hour before sunset, I headed to the top of a foothill that would give me an unobstructed view of the mountain and the cloud.

Lenticular clouds appear to hover in the sky, but they’re actually quite active. They are formed when strong winds carry moisture over tall peaks, producing an atmospheric disturbance that is much like the wake from a boat. The cloud appears in the disturbance.

While I did get some of the sunset color on both Rainier and the cloud, I decided instead to process the image in black and white. It was an unusual choice for me.

I’m typically drawn to very intense colors. But as I thought about it, what I loved most about this scene was how the cloud balanced the mountain. It was almost a yin and a yang. The black-and-white treatment made that connection stronger.

Nearly a decade after I captured the image, it remains one of my most popular prints and, personally, one of my favorite images of Mount Rainier.

The G2 Gallery in Venice, California, is featuring a print of this image in its exhibit on Western national parks, part of its 100 Years of National Parks series honoring the centennial of the National Park Service. Prints are also available directly through the photographer.