We live in an age where virtually everyone is a published photographer. Many people now take photos every day. Most of these are quick snapshots to show off where they are, themselves or their dinner. Seconds later they’re published on social media for all the world to see.

There has never been a time when we’ve taken so many photos — and thought so little about taking them. So as someone who painstakingly crafts images, trying to produce a few that truly matter, I think it’s helpful to share the process that resulted in them. Those rare gems are usually the result of a lot of work.

While this image of a gull flying through a golden mist cloud at Niagara Falls represents only a tiny fraction of a second — 1/1000th, to be exact — the creative process that I went through to capture it spanned two days. That is much longer than usual for me, but changing weather and a desire to photograph a heavily developed area without showing any of that development made my job especially difficult.

I took more pictures than usual as I was working my way through my creative process. Many were intended to be “safety images,” giving me at least a satisfactory image in case I wasn’t able to produce anything better later. Others served as tools to help me refine my approach. I’ve selected a handful of images over the course of those two days to show you what I was thinking at various stages. Typically, I go through a fair amount of the process before the camera even comes out of its bag.

My creative process is often one of simplification. I believe that what separates snapshots from works of art is interpretation. To capture a snapshot of the falls, you merely need to wander up to the railing, aim the camera at the waterfall and press the shutter button. To create art, you need to think about what you want to communicate and then use all available tools — composition, framing, lighting, time of day, weather, seasons, aperture and shutter speed, and so on — to craft an image that says that for you.

Creatively, much of my inspiration comes from impressionistic painters. While I have used camera movement during long exposures to create truly impressionistic scenes — like these cherry blossoms or this log over a river — I am inspired by their ability to simplify scenes to their essence. I try to do the same with more straightforward photography.

Consider this work by Pierre Bonnard, Table Set in a Garden, which I got to study in person recently. The chair and table are relatively sharp, but a large portion of the tree in the upper left corner is depicted with a single, long green squiggle. Nothing more is needed to capture its essence. In fact, more detail might have been a distraction. 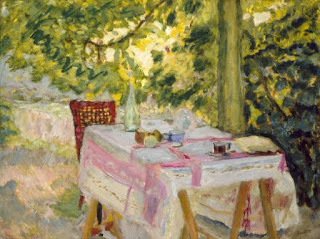 In my work, I think about what I want people to notice about the scene or how I want them to feel. Then I work to simplify the image until it contains only the necessarily elements to get that across. As you look at my progression of images here, you’ll notice that, as a whole, each successive image contains less and less of the waterfall.

The first image in the series was captured at a focal length of 35mm. The final image was created with a focal length equivalent to more than 500mm. Given that the waterfall itself is nearly a half-mile wide, this progression may seem counterintuitive, but by being very careful with the elements that you choose to include in the image, you can express great size without needing to show much of the waterfall at all.

Arriving at the rim, I was immediately struck by two things: the beautiful green color of the water and the huge cloud of mist. I decided both would be key components of my image. I also wanted to avoid any of the manmade development that would detract from that.

The first image, as straightforward as they come, was taken well before sunrise when I had the waterfall to myself. I captured the water color and mist, but I think that showing the entire falls actually detracts from the sense of scale. You immediately want to use the lights and building in the background to try to figure out how large the waterfall is, and those features are not what I want you to notice.

I knew I would have to get closer.

This image is much more abstract. While you can clearly see the top of the falls, the bottom vanishes into the mist cloud. I do like the abstract nature of the vanishing vertical lines, but I realized that what I liked about the mist was what it represented: sheer volume and force. This was a mist cloud without those elements.

Moving closer still, I framed the mist with the curve of the waterfall. Again, it’s becoming more abstract. You can no longer see the top and bottom of the falls. I’m quite pleased with the image.

As more light falls on the waterfall, I notice something odd. I see birds — mainly gulls, but also cormorants — fly right up to the crashing water. I put a 400mm lens on my wildlife camera and start documenting this.

I like the gull image, but it’s a bit more delicate than what I was going for. I think the cormorant image is strong, but it’s missing the mist cloud and the green color is a bit subtle. But I finally feel like I have the key visual elements that I want to work with. I was ready for Day Two.

When you want a color to stand out, one thing you can do is to find a way to add its complement. On the color wheel, across from bluish-green is reddish-orange. And in late summer, the sun still rises far enough north to bathe part of the waterfall and the mist cloud in the perfect golden light I wanted.

I began with a wider image of the falls with the sun shining through the mist cloud. (I used a 3-stop graduated neutral density filter to balance the light from the sky with the waterfall, which was still in the shade.) While this image has proven popular, I was still hoping the birds would give a repeat performance so I could pair them with golden mist.

After this, I shot only five more frames of the falls. Two were of this same gull split seconds later. Three more were of a different gull flying in a darker part of the gorge. I packed up my gear and had breakfast while watching the falls. I finally had an image that said what I wanted to say.

A special print of this image, printed on cotton, is on display as part of the 100 Years of National Parks exhibit at the G2 Gallery in Venice, California. The exhibit runs through April 3, 2016.

And if you enjoyed this, I have done one previous "show your work" post involving my approach to photographing a frozen pond.

Wow. That was so interesting to read about your process, and how you carefully honed in what you wanted to say with the succession of pictures. Thank you so much. I learned a lot.

Thank you so much for your kind words! I'm glad this helped you. I'd like to do more of these posts, but I usually go through the majority of this process in my head. It's really rare for me to have a folder full of outtakes to allow me to "show my work." Thanks again!