The legend of the first robin 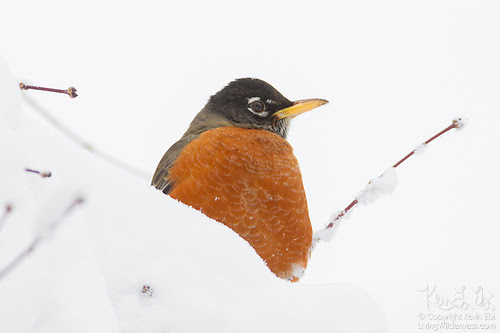 The transition from boy to man isn’t easy for any teenager, but it was especially difficult for a boy named Opichi. He made that transition many years ago and we still celebrate it to this day — every year when winter transitions into spring.

The rite of passage for the Ojibway boys was similar to that of the young of any other tribe. When they were ready to become a man, they would spend a night alone in the forest and wait for a vision. The problem for Opichi was that nothing was good enough for his father.

Opichi spent the first night at the top of a hill in a small lean-to his father helped him build. The cold north wind was relentless. He sat on the ground. His only real protection from the freezing temperatures was the deer skin that he wrapped around his shoulders.

When morning broke, Opichi’s father climbed up the hill and poked his head into his son’s meager shelter.

“A deer came and spoke to me,” Opichi replied.

“That’s good,” the father replied, “but you can do better.” Opichi’s father was a very respected man in the tribe. Having a son who merely saw a common deer in his quest just didn’t seem fitting for a man of his stature. “Continue to wait and fast. Surely a better vision will come to you.”

The second night it snowed and at times his hungry, growling stomach was almost as loud as the wind.

“What did you see?” his father asked the following morning.

“A beaver came to me and taught me a song,” Opichi replied.

“That’s better,” his father replied, “but you will gain more power if you stay longer.”

Over the next four nights, it continued to snow, piling up higher and higher. Opichi was visited by a hawk. Then a wolf. He even saw a bear and an eagle. None impressed his dad.

His mother had grown more and more worried as each night passed, but her husband had talked her into letting the vision quest continue. After the seventh night, however, she decided to put an end to it.

“Opichi has been out there long enough,” she said to her husband. “I’m going with you this morning and bringing him home.”

She prepared a hot meal — more of a feast, really — and they marched up the hill to present it to Opichi to rescue him from the cold and his hunger. But when they peered inside his shelter, there was no sign of him. Instead, a black bird with a bright red breast flew out.

“Mother and father,” Opichi said, “you see me as I am now. You sent me out too early and left me out too long. My bright red breast now gives me warmth. I must fly away now, but I will return each spring when the bitter cold becomes warm. It is only then that you should send boys out on their vision quests.”

— Based on an Ojibway legend