As another year draws to a close, it's time to look back on my favorite images of the past 12 months. It's an exercise I've been doing in some form or another for virtually my entire time as a nature photographer. When I'm down, looking back can be inspiring. It can also help me see if I'm in a rut and challenge me to go in a more creative direction next year.

This year, it's an especially interesting exercise, given that I spent much of the year looking back over my entire career. My new book, Living Wilderness, is a fine-art portfolio of all my work so far. To produce it, I had to comb through nearly 15 years of work to select fewer than 150 standout images that could still work together.

I also traveled less than I usually do. But that just made me work harder close to home. In fact, two of my favorite images came from the yard around my house.

So here they are, my 10 favorite images and why (you can click or tap on any image to enlarge it): 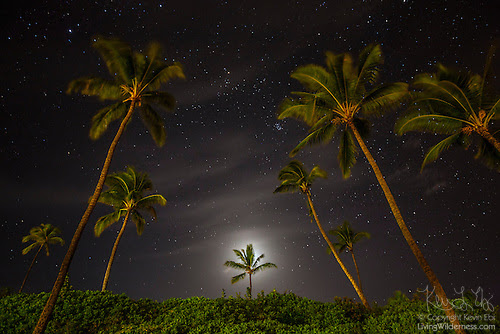 I'm someone who likes to plan, yet sometimes plans do not work out. The key to much of my success has been keeping an open mind and seeing other possibilities. This image came about when I was hunting for the Zodiacal Light, a pillar of light that shines at night in the spring and fall. I couldn't find it on this night, so I worked to capture this scene instead. It's from Makena Beach on the Hawaiian island of Maui. What I love about the remote parts of Hawaii is that the night lights are celestial — not incandescent. 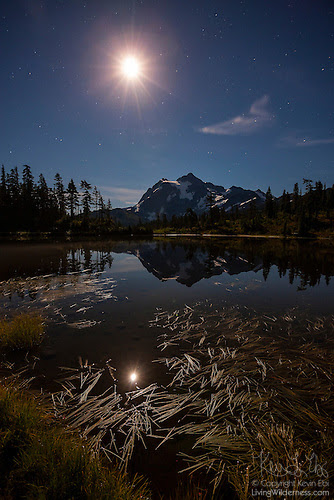 And then there was the time I tried to capture the northern lights over Washington's North Cascades. They never did shine on this night, but I'm not one to stand out in the cold for nothing. Mount Shuksan and Picture Lake have probably been featured in millions of images, but they look completely different at night. I walked around the lake until I found a way to use the floating grasses to frame the moon's reflection. I like this image better than the picture I had imagined I would get. 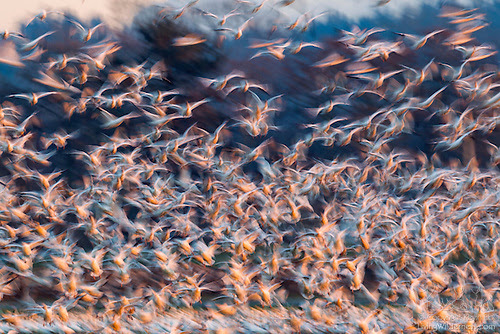 I couldn't begin to tell you how many times I've photographed the wintering snow geese in the Skagit Valley of Washington state. But rather than being bored, I've tried to create different images of them than I have in the past. This year, as the sun was setting and the light was getting dim, instead of putting the camera away, I kept shooting. The exposure was 1/10 of a second — generally far too long for any kind of wildlife photography, especially a flock of birds in flight. But enough of the birds are sharp so that you can tell what they are. And the motion blur in the rest of the image helps to illustrate what that chaotic scene is really like. 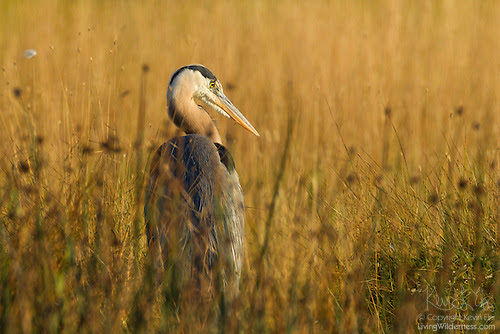 Similarly, I couldn't tell you how many great blue herons I've photographed. I found this one in a marsh in Edmonds, Washington, where there were reports of a merlin. Like a number of other people, I wanted to photograph the merlin, but it wasn't cooperating. Instead of packing up, I decided to photograph the herons, a subject I've photographed thousands of times. I thought the golden light and out-of-focus reeds made this a very special scene. Within two weeks of capturing this image, a slightly different version of it was licensed to a worldwide magazine, making this one of my fastest images to end up in print. 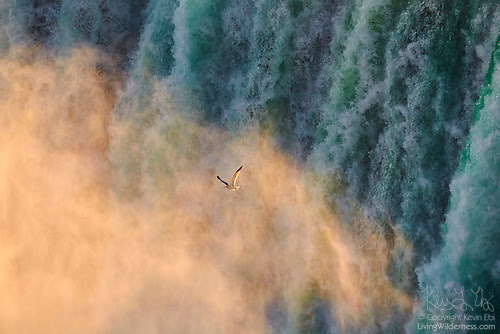 I got to see — and photograph — Niagara Falls for the first time in my life late this summer. At first, the experience really bothered me. Here you have what's arguably the most amazing waterfall in North America and it's surrounded by casinos, neon and video billboards. By my second morning there, however, I began to see past the clutter. I made a couple of images that I really like. My favorite varies from day to day. Today, this is my favorite. Together, the light, the shadow, the suspended water droplets and the herring gull create a dramatic image that captures the essence of the amazing waterfall without the graffiti. 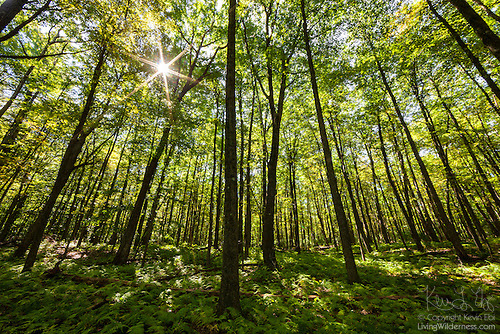 One of the highlights of my year was being chosen to exhibit my work in what was undoubtedly the definitive photography exhibit to honor the 50th anniversary of the United States Wilderness Act. Just 10 other photographers were invited and they included David Muench, Marc Muench, Clyde Butcher and Robert Glenn Ketchum. I was incredibly honored to be invited to exhibit with such an elite group. The show was held in Warren, Pennsylvania, near the home of Howard Zahniser, who devoted much of his life to getting the act through Congress. Near Warren is also one of the country's smallest wilderness areas. Friends of Allegheny Wilderness is working hard to expand it and the group's executive director took me on a hike through proposed additions. While these may not be old-growth trees, they are stunning nonetheless. As I caught the sun through the green canopy, shining onto a carpet of green ferns, I knew I had captured one of my best images of the year. Hopefully, this scene will be preserved for generations to come. 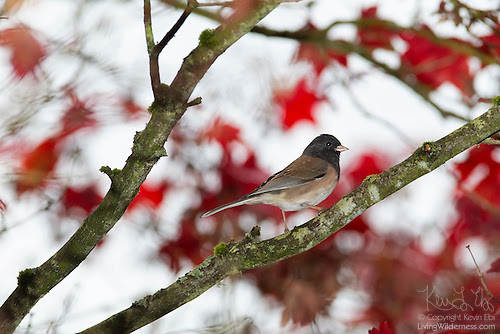 This is an image from my front yard. Over the years, we've planted lots of trees and tried to create a bird-friendly environment by placing feeders and letting rhododendrons go native. Hummingbirds, chickadees and juncos now visit regularly, and this Oregon junco posed for me in a maple tree at the peak of its fall color. 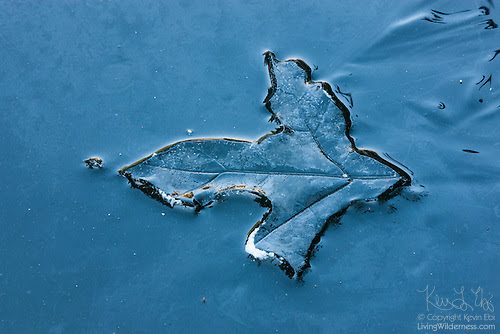 And this image is from my backyard. During a deep freeze, I spent several days shooting icy images. It all started with a leaf on a sheet of ice, but my biggest source of inspiration came when the leaf blew away leaving this icy impression. You can read more about the creative process behind this image in a previous blog post. 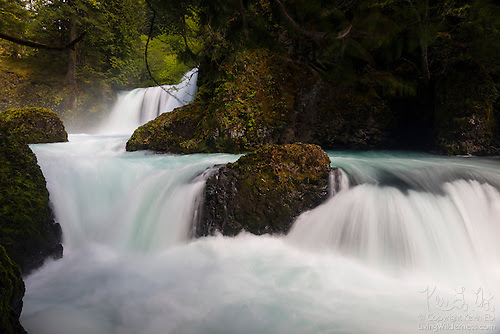 I made several trips to the Columbia River Gorge this year to present my Year of the Eagle project and I had some free time after taking down the exhibit, so I hiked to this waterfall, called Spirit Falls. It's a tough hike. You have to scramble a couple hundred feet down a steep hillside covered with loose rocks. But kayakers do it all the time so they can race over the falls, so I figured a camera bag and tripod were nothing by comparison. The faint trail ends at the top of the falls, which are pretty enough, but I wanted to photograph both tiers and the rocky gorge. I found a rope and using skills I've needed only one other time since elementary school gym class, lowered myself to the base. I got a little wet, but it was completely worth it. 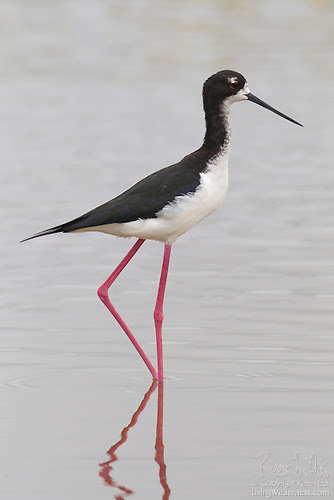 I had a couple hours before my flight left Maui. Rather than spending any more time in an airport than I had to, I went for a hike in the Kealia Pond National Wildlife Refuge, which is home to the endangerd Hawaiian stilt, among other birds. The stilt has the longest legs in proportion to its body of any bird in the world, but you rarely get to see their full length since the bird is almost always wading. I positioned myself to capture the bird with the reflection of its legs. I like how this image almost makes you do a double-take. The leg on the right looks normal, but the leg on the left looks as if it's triple jointed.

My favorite is the image of the snow geese!