An adventure to fill the spirit 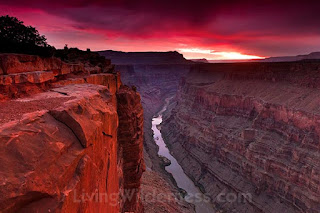 The Grand Canyon is the second most popular national park. More than 4 million people visit each year. So it's a little surprising there's any place where you can have part of the rim to yourself.

Two and a half hours of bad road — 25 percent of travelers will suffer at least one flat tire — act as a strainer, keeping all but the most dedicated adventurers out.

The adventure is worth it. There's just one word to describe the payoff: Wow! In the more popular sections of the park, it's hard to view the canyon in context. At the official north and south rims the canyon is more than 10 miles wide; you can't see the other side.

The width here is just a mile, but the canyon is still 3,000 feet deep. Here, it not only feels like a grand canyon, it's one of the few places where you can see the Colorado River, which carved it.

The adventure begins from the town of Fredonia, Arizona. Get all the fuel and supplies you need here. Civilization ends at the city limits.

Follow highway 389 west for about 8 miles until you see a small turnoff and dirt road on your left. A sign tells you "Toroweap" is 61 miles away. The drive seems easy enough, but the rocks can be sharp. When I went, about 10 miles in there were pieces of someone's fender littering the road. There are two other roads, but they're supposedly even more rugged.

The national park boundary is about 10 miles from the end of the road and it's one of the few places where the park service displays a sense of humor. A sign welcomes you to the "Greater Tuweep Metropolitan Area." The greater metropolis consists of a ranger's residence, a maintenance shed and a vault toilet. It's bordered by the lesser metropolis, which consists of a cattle pasture and tumbleweed. 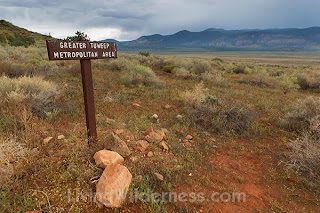 Once you've left the metropolitan area, the road gets really bad. You definitely need a high-clearance vehicle to navigate the boulders, potholes and other obstacles. Depending on your comfort level, in a few spots you may need a passenger to get out and spot you.

But when you reach the rim, you almost forget how hard it was to get there. There aren't any official trails at the main overlook, but you don't need any. It just adds to the sense of adventure. I practically felt like a kid again scrambling up and down rocks to check out the view from various points.

The adventurous spirit worked its way into my photography, too. I laid down to photograph the reflection of a peak in a natural pothole that trapped water from a recent storm. I stayed up late that night to photograph the canyon and the landscape above in the light of the full moon (there are nine spaces in a primitive campsite near the rim; first-come, first-served).

Whatever it's called, my time there ranks among my best days of photography and it's not just because of the spectacular view. The adventure transformed me into an explorer. I hunted to see what there was to see. I wanted to experience the area, rather than simply look for a place to hold my tripod.

If your photographic spirit gets a flat, try filling it with an adventure. 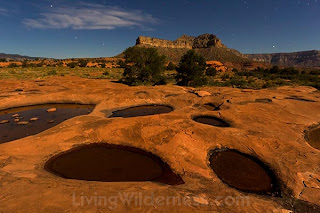 (Kevin's new book, which traces a drop of water from the ocean into storm clouds and ice caps and back again, is now available. Check out a full preview of Running in Circles.)

Enjoy reading your blog, including your descriptions of this visit to that section of the Grand Canyon! Thanks Kevin.