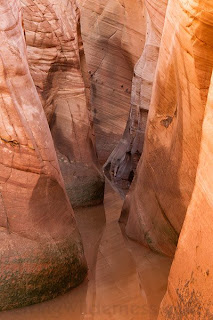 It rains in the desert. And when it does, it rains hard.

I've always known this. I've made close to a dozen serious photo expeditions to the American Southwest, always timing my slot canyon hikes for the time of the year when I'm least likely to be swept away in a flash flood.

But until my trip to Arizona and Utah this month, I had never personally experienced how wet a desert can get. It's nothing like the storms even in the rain forests of Olympic National Park that I've "enjoyed" many times.

The intensity isn't much different; heavy rain is heavy rain. The difference is that the desert simply isn't equipped for it.

There are no towering big leaf maple trees to act as natural umbrellas. There are few plants to drink up any of the water. And the land, which for thousands of years has been baked like a clay pot, doesn't absorb any either.

And it's amazing to watch.

One afternoon, while photographing the fall color in the Kolob section of Utah's Zion National Park, the sky turned black. Moments later, the rain began. The hotel shower that morning wasn't anywhere that wet. Puddles formed everywhere, but the real show was on the mountainside in front of me.

All of the rain landing on the mountain was funneled into a handful of channels carved by all of the storms that preceded it. Water has no place to go but down and as fast as possible. Waterfalls raced down the mountain with such force, they pulled down pieces of the mountainside with them. Some waterfalls consumed so much red sandstone, they turned red themselves.

I counted 13 waterfalls on the north face of Paria Point. The smallest was a few hundred feet tall; the largest was a few thousand.

With each raindrop, the nearby river — actually, it's a wash — grew louder. There are few rivers in the Southwest, except during a storm. You see dry riverbeds most of the time. During a storm, raging rivers flow there, "washing" away any plants or debris that accumulated since the last storm. The babbling brook that I noticed when I first started hiking was now a powerful force I wouldn't dare cross.

As fast as it started, the rain stopped. The waterfalls dried up almost immediately.

Now that I knew where to look, I could see evidence of all the prior storms. I saw narrow passages swept clean. I saw big chunks of sandstone on the canyon floor. I saw black stripes running straight down the mountainside where the temporary waterfalls left deposits.

I couldn't have planned to photograph any of this. That day's weather forecast called for stormy weather, but it didn't sound especially epic.

The image below is of the waterfalls tumbling down Paria Point. I tried to photograph it the next day when the forecast called for even more storms. I ended up seeing two of those waterfalls again, but only two.

That makes me appreciate my few short minutes in the Zion water park even more. Sometimes the key to creating dramatic images is simply having your eyes open to nature's wonder.

(Kevin's new book on water, called Running in Circles, will be available soon. Become a Facebook fan of LivingWilderness to learn more.) 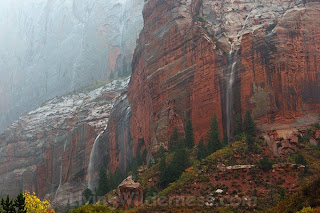