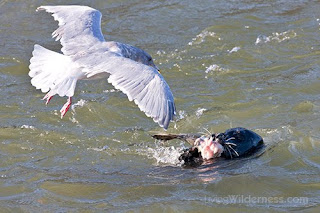 Some of my best bald eagle images have come from British Columbia on a little levee in a little town between the sea and the mountains.

Once I saw four eagles share a log, just hanging out, watching the river flow by. Another time, a bald eagle flew right by me, fresh salmon in tow, then land and eat lunch maybe 30 feet from where I set up my camera.

I’ve been going to this spot right around Christmas every year for the past few years. As impressive as it’s been, people who live around there have told me I should go a little earlier in the year. Come in late November, they say, and where I saw four eagles, I would see eight. Or 12.

This year, I took their advice. And this year, I saw one eagle – maybe two. It was hard to tell. They were so far away, the white head I saw may have been a patch of snow.

The eagle watching may very well be better there in November. It just may have been a bad week. When it comes to hunting for food, the bald eagle is more like a crow than a grizzly bear. Maybe a rendering truck spilled its load an hour up the road. Who knows?

What happened next is the single reason why my photo trips are as productive as they are: I looked for something else to photograph.

I scanned the horizon and saw a pyramid-shaped mountain I had never noticed before. In the past, I had been too busy looking at the birds to even notice the mountains. I found a spot where I could photograph the moon setting behind the peak.

Then I went back to the empty levee and hiked. In no time at all, I spotted a harbor seal chowing down on a fish. A handful of gulls spotted him, too. For a half hour, I photographed the seal and gulls in a dramatic game of keep away.

Oh, what a great day it was!

That morning, after the planning, the anticipation, the three-hour drive and the line at the border, it would have been easy to head home, cussing about the empty memory card. That’s obviously the wrong approach.

I became a nature photographer because I love being out in nature, and nature is unpredictable. Sometimes nature puts on a show that’s far better than anything I could have imagined. And sometimes things just don’t work out.

The fact that there were no eagles didn’t change the fact that I got to spend a day in nature doing something that I love to do. When life deals you an empty river, go fishing somewhere else.

(Check out my latest images at LivingWilderness.com)

Email ThisBlogThis!Share to TwitterShare to FacebookShare to Pinterest
Labels: opportunity

It is amazing that a harbour seal was that far upstream! It's disappointing that you didn't get a good eagle show, but it allowed you to search the landscape and get a gem of a shot. Nicely done!