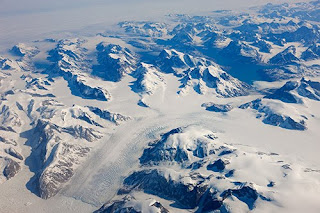 There’s nothing quite like standing on the top of a mountain, admiring a view that stretches for hundreds of miles. Looking out an airplane window is a close second, and with a little work, you can get some stunning images — even from a seat in a commercial jetliner.

I get a window seat whenever I fly. Aerial photography is pretty expensive to produce. Even the cheapest sight-seeing helicopters charge you hundreds of dollars for an hour. So why not try to get some aerial photography in while you’re flying to your destination? What else is there to do?

I generally try to get a seat between the wing and the tail. If you sit too close to the wing, you won’t get much of a view. You don’t want to sit right behind the wing either. The exhaust from the engine can really distort any images.

(Some jetliners have engines on their tail. If that’s the case with your plane, don’t sit in the last five or six rows. As you’re booking your flight, the web site usually shows you what kind of plane you’ll be flying on. Do a Google search on that type of plane before you book if you’re not sure where the engines are.)

Which side of the plane should you sit on? Often, there are great photo opportunities on both sides. However, depending on the destination, I may try for one side or the other.

For example, whenever I fly south out of Seattle, I try to sit on the side facing east (the left) so I can photograph Mount Rainier. When I flew from the north island of New Zealand to the south, I also sat on the east-facing side (again the left), so I could photograph the gorgeous mountains near Kaikoura. And when I flew back to the United States from Iceland, I requested a south-facing seat (yet again on the left) so I would have a better view of the stunning mountains in southern Greenland (the photo above).

To get an idea of what you’ll see on your flight – and therefore, which side you should sit on – run the flight information through FlightAware.com. It tracks all commercial flights within the United States, showing you the paths of several previous flights on that route.

Every flight is a little bit different because of weather, traffic patterns and whatnot, but it gives you a great idea of what you can expect. Switch the map from Classic to Earth View to get a better idea of what the terrain looks like.

Now that you have your seat, here are a few tips for taking pictures during the flight:

• Wear dark clothing. Bright clothing with intense colors will reflect on your window, wrecking your image.

• Use a lens hood. That will help minimize other reflections.

• Bring a cloth to wipe the window.

• Use the fastest shutter speed possible. Even in bright daylight, I try to use a shutter speed of 1/1000th of a second or faster. Remember, your plane is traveling 400 miles per hour or faster.

• Use a lens in the “normal” range. The plane is going too fast for you to use a telephoto lens.

• Don’t let the lens or the lens hood touch the airplane window. The vibrations from the window will make your image blurry.

• Shoot around the flaws in the window. I’ve yet to find a jetliner window that wasn’t seriously flawed in one way or another. Carefully examine the window and try to shoot through the best part.

• Use your camera’s burst mode. I’ll typically fire off a half dozen images at once in order to get one or two sharp images.

Have fun! Aerial photography is incredibly addictive and rewarding. It’s almost enough for me to look forward to my next flight. Almost.

(Check out more images at LivingWilderness.com)