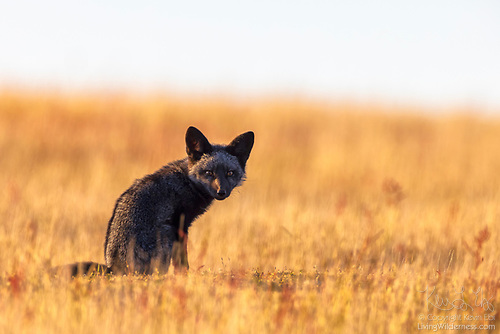 This year, there are tough new restrictions on photographers. Even still, there are photographers who get too close to the foxes. One large group even nearly surrounded a mother and her kit. Residents, who have been trying to close the area to photography for years, are growing more upset. At least one has even threated to use a gun to keep photographers away.

I was recently asked my opinion on the toxic situation that has formed there. Without question, there are photographers who care more about their pictures than about the welfare of their subjects. Their behavior is wrong. They should be fined and banned from the parks. But I also think we’re trying to overly simplify a problem that has many causes.

One is that too much of nature photography involves mimicry. If someone gets a photo that gets any kind of attention, there’s no shortage of photographers who want to make their own copy of it. After I published a picture of a relatively unknown, but very photogenic seasonal waterfall along the Continental Divide in Montana, I received hundreds of messages from photographers wanting GPS coordinates to it. Some had even extracted metadata from my digital files so they could go at the same time.

I’m not against photographing where someone has taken a picture before, but I fear that for a growing number of people, what’s doing well on Instagram today is what they’ll photograph tomorrow. There are fragile ecosystems that just cannot handle a crush of photographers, all of whom are trying to get the very same shot.

What’s the solution? If you get an image in a sensitive area that’s likely to attract a crowd of copycats, consider waiting a while to post it to social media. The people who are truly inspired to see it with their own eyes will seek out the opportunity on their own. Those who are looking for an easy path to Instagram likes will find an easier subject. There are some Yellowstone photography groups that require people to wait a day or two before posting pictures of animals that are certain to draw a crowd. I think that’s a good policy. And use discretion when sharing locations.

If you’re a photographer, consider occasionally taking pictures of less popular creatures and subjects. I know people who have created amazing portfolios of backyard birds. I also enjoy getting out and exploring — going out to less popular areas without an agenda and seeing what opportunities I can find.

But I also think that photographers are just one part of the equation. The number of people who want to get out in nature is growing dramatically. I couldn’t find figures for photography, but by some estimates, the number of birders has grown nearly 50 percent since the start of the pandemic. Access to nature, however, has not kept up. In fact, over the past several years two national parks in Washington state have converted areas that were once easily accessible by car into areas that can only be reached after a serious hike.

I love pure wilderness, but we must realize that not everybody has the time or physical ability to reach it. We need balance in our management of public lands. If demand increases, but the supply decreases, we create overcrowding and harm animals and damage the landscape in the process.

It’s easy to get caught up in the pursuit of an amazing photo, but we do need to think of the consequences of our actions. It’s easy to prioritize photography over everything else, but that’s wrong. Even a picture like the flying fox did not change my life. And no photo is worth risking an animal’s life.