In search of the Salt River wild horses 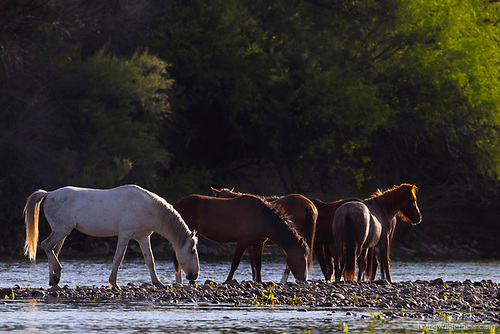 If there is an animal that’s synonymous with the American West, it might very well be the horse. But in our minds, the horse usually isn’t alone. It’s typically paired with a cowboy.

Along the Salt River outside Phoenix, Arizona, if you look hard, you might just spot a horse. It’s likely not alone either. If you look even closer, you’ll likely see many more. The horses here have no owners. They’ve been on their own for hundreds of years, making their own lives along the riverbanks. And somehow they’ve thrived, despite countless attempts to get rid of them.

There has been some dispute over whether the Salt River mustangs truly qualify as wild horses. For most of the past century, several levels of government have said no. The federal government called them “feral,” a label that disqualified them for any sort of protection.

Evidence, however, suggests that the horses have been on their own for so long that they forgot they were ever domesticated. Even the state of Arizona eventually came around. In 2016, it declared the horses to be “not stray livestock,” as close as any official body has come to acknowledging that they roamed free before our government even existed. 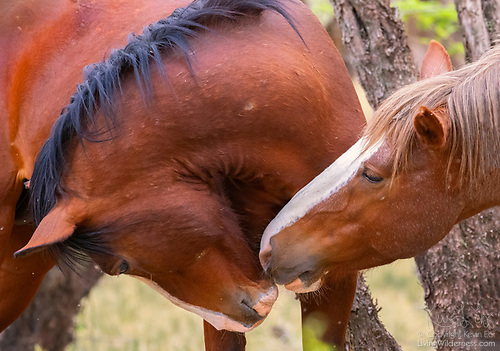 The Salt River mustangs, like all the wild horses in North America, have an origin story that begins with early explorers. Spanish explorers brought them to the continent in the 16th century. The Salt River Wild Horse Management Group, which is fighting to protect the horses, figures missionaries brought them to central Arizona about 100 years later. Shortly thereafter, they escaped or were released after they ceased to be useful. Whatever the case, they have been free ever since.

There wasn’t any debate over whether the horses were wild until the early 1900s. Of course, they were wild! In 1890, the Arizona Champion newspaper went so far as to call them “native.” But in time the horses were seen as unwanted competitors, fighting with cattle for scarce resources on public land in a state that’s mostly desert. So began a drive to obliterate them from the landscape.

Shortly after the turn of the century, the federal government was issuing calls to kill on site any horse found in certain parts of the country. By the mid 1920s, a horse slaughter facility opened in Arizona to deal with all the carcasses. It was called Arizona Reduction Works, giving a clinically industrial name to the gruesome goal. In its first couple years, it primarily produced dog and chicken feed, but that was just the beginning. As output increased, it also sent meat to Holland and pelts to a coat factory in Los Angeles. 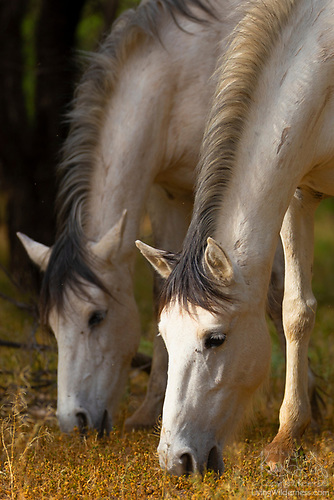 When the slaughterhouse opened, there were still a half-million wild horses in Arizona. Today, there are probably a half-thousand. The Salt River mustangs are one of the few bands that remain. The Salt River habitat is likely what saved them.

Not even 20 miles away, the landscape is fairly open. Casually glance between the slender saguaros and you easily see towering red sandstone cliffs. But here along the river, the environment is comparatively lush. There are a few cacti, but they’re surrounded by mesquite. The mesquite grows so thick it’s almost impenetrable. Federal agents tried to get to the mustangs here in 1974. They gave up after a day. They wrote that the thick brush made it impossible to even observe the horses. 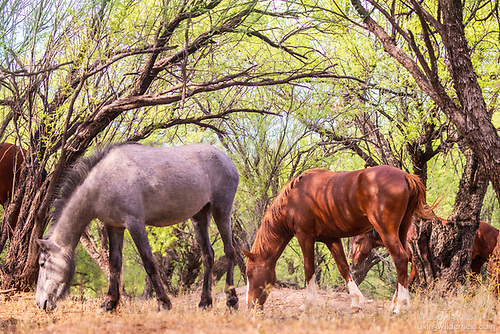 I’m able to follow a sandy trail, a path forged by the mustangs as they travel back and forth from the river to various feeding grounds. Even still, I hear the horses long before I can see them. I hear a couple of snorts. I can tell they are somewhere off to my left. After squeezing through some brush, I can finally see one. Moments later, I see perhaps a dozen more walking behind it.

As animals go, they’re not the wildest I’ve ever photographed — they’re less skittish than deer — but even still, they are wild. Even if I wanted to, I couldn’t pet one, let alone try to ride it. 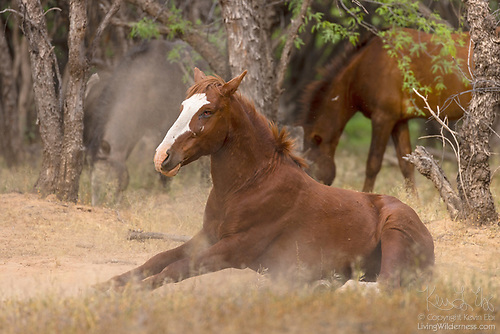 But I also don’t feel the least bit threatened. They accept my presence and aren’t bothered by me. Any danger comes from the fact it’s breeding season. A few stallions are fighting for dominance. If I don’t keep my distance, they could accidentally run me over or hit me with a wayward kick.

I get about an hour with the horses before I need to start hiking back to my car. It’s getting dark and my vehicle is probably a mile away. I make plans to come back in the morning. 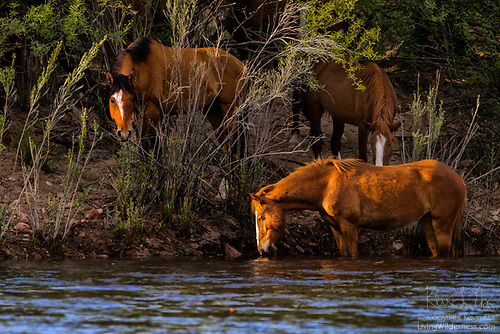 The mustangs are even harder to find the next day. I see hares and a bald eagle. There’s a patch of desert sand verbena and I spend a half hour shooting landscapes that prominently feature the purple flowers. Finally, I hear the footsteps of horses. It sounds like they’re in the water.

I can’t see them — the mesquite is too thick — but they sound close by, maybe 200 feet or so upriver. I continue to hear clip-clop, clip-clop, followed by splashing. I finally decide to take off my shoes, roll up my pants, and wade out into the river. I figure if I get far enough out, I’ll be able to see beyond the thick patch of mesquite that’s hanging over the water in front of me.

It was worth it. I see two mustangs splashing their way across the river and nearly a dozen more on a gravel bar dipping their muzzles into the water to drink. The sun is rising behind them. It’s a spectacular scene. I get to enjoy and photograph it for about 15 minutes before they vanish one by one into the woods.

I no longer know exactly where they are, but I know they’re there — just as they’ve been for hundreds of years. 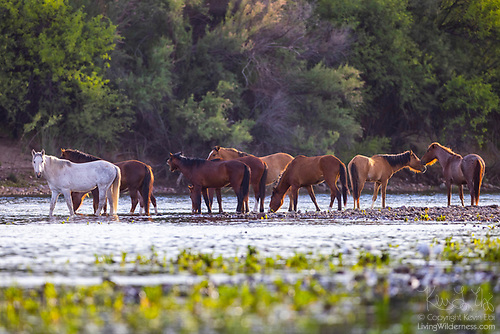