The struggle of wildlife photography 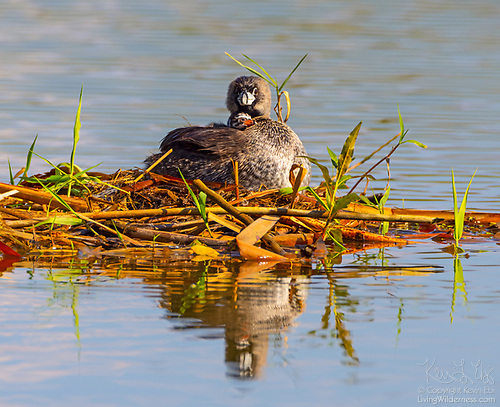 There’s a lot about nature photography that’s difficult. Fighting uncooperative equipment. Braving intense weather. Conquering tough trails. But one of the most difficult aspects is standing around, doing nothing, as nature does what nature does.

Let me tell you about an afternoon I spent observing the nest of a pied-billed grebe.

The pied-billed grebe is a favorite photography subject of mine. They were one of the first birds that I saw when I started kayaking in the wetlands of the Seattle arboretum more than 20 years ago. They’re sleek birds that feed on fish. I would see one nestled among the lily pads. Suddenly, it would vanish beneath the water only to emerge a few seconds later and several dozen feet away with a fish in its beak. They weren’t afraid of me, but they are busy birds. Trying to make an artful image of them was one of my first photography challenges.

A few months later, I saw their young and I was captivated by them even more. The adults look they are dressed for a black-tie affair. They are mostly dressed in an elegant black with a few crisp white touches. Their young, however, between their bold stripes and red flourishes, look like they just emerged from the face-painting booth at a county fair. 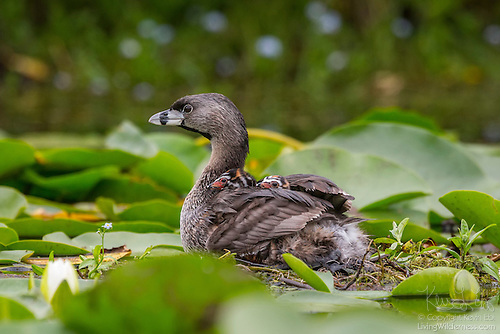 They get even more adorable. For the first few weeks of their lives the chicks get around by riding on their mother’s back. If there’s anything better than drama in a photograph, it would have to be cuteness.

The grebes no longer frequent the wetlands where I used to find them. Bridge construction may have driven them off. But I stumbled across an active grebe nest while walking in a different Seattle park this month. The joy I felt faded rapidly. I realized the scene before my eyes was more about struggle than cuteness.

When I first saw the nest, I saw a mother with two young chicks. She was down to a single chick a couple days later — and she was trying to care for it by herself. Whenever she was away from the nest — and that was most of the time since she had to do all the hunting — I could also see an unhatched egg. 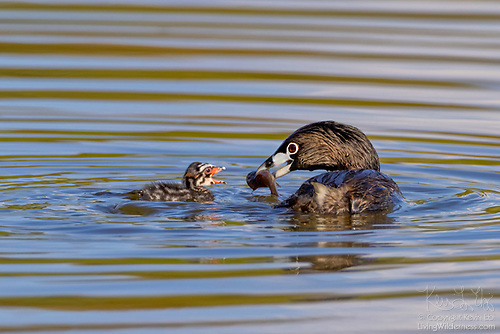 At first, her chick patiently waited on the nest for her to return. Whenever it saw her approach with food, it slipped into the water and greeted her. After getting a mouthful of fish, it climbed back into the nest as she dashed off to catch another.

The mother is one of the more skilled hunters I’ve ever watched. She worked the entire pond, which is roughly the size and shape of a football field, only with curvy sides. I couldn’t see anything in the dark green murk, which looked more like a vegetable-based health drink than water. She, however, could. As she raced off, she turned her head side-to-side as if scanning for opportunities. When she found one, she would dive under the water. Probably three out of four times she would come back up with a fish. 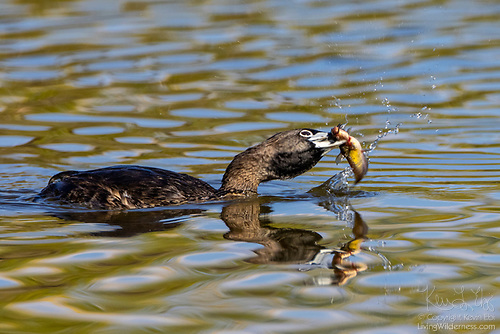 She was also a master of efficiency. Wasting no time, she would process the fish by slapping it against the water while she sped back to the nest.

She managed to deliver more fish every 15 to 20 minutes or so, almost on a regular schedule. But one time, the chick decided not to wait and left the nest to look for her.

The chick headed off in the direction that she first went, but it didn’t seem to know that she had struck out there and was now on the opposite side of the pond. Even for me, she was a bit hard to see, sometimes disappearing behind wood debris that littered that section. 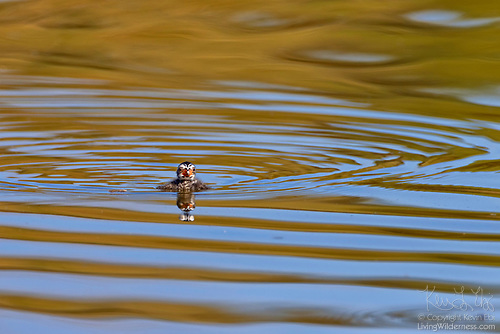 Once it was about 25 feet from the nest, it spun around and looked back. I got the sense it wanted to return to the nest, but it couldn’t. A breeze had picked up and it wasn’t strong enough to paddle against it. Worse, it was being blown farther away.

Couldn’t I just help the chick? Practically, no. Impenetrable vegetation hung over the water’s edge most of the way around the pond. Going through the pond wasn’t an option, either. There was a couple of feet of water over a base of thick muck. Even if I was dressed for the challenge — I wasn’t — there’s little chance I could reach the chick, let alone get it back to the nest. And even if I got it to the nest, there was no guarantee it would stay. Or that the mother would return after I interfered.

Then there are the moral questions. Helping the chick would have consequences for other residents of the pond. If the chick thrives, more fish die. If the grebes are too successful, perhaps some great blue herons starve because they can’t get enough food. Or maybe the fish population shrinks to a point where it can’t sustain future generations. Maybe the chick’s life is needed to feed the family of bald eagles that lives nearby. Every resident of this ecosystem is competing in a game of life that I am not qualified to referee.

All I can do is be a detached observer. Except I’m not entirely detached. I’m growing sadder by the minute. As the breeze blows the chick into part of the pond that’s out of my view I wonder if I’ll ever see it again. For now, I can still hear its high-pitched chirp.

Just before the chick vanished, I was joined on the bank by two photographers. One had witnessed the first egg hatch. I learned the chick was either three or four days old and that it once had two siblings — one of which lost its life in a situation that was much like the one we were watching unfold now.

Every few minutes we would hear its tiny voice from somewhere beyond the blackberry bushes. Then there was only the sound of the breeze.

We hoped that the mother would realize that her baby was missing and go rescue it. But for all her skill as a hunter, she acted downright aloof as a parent.

She eventually returned to the nest with a fish and noticed the chick was gone. Rather than hurrying to find it, she devoured the meal herself. Then she started preening. More precious minutes slipped away.

One of the photographers theorized that the poor mother had finally gotten to the point of absolute defeat. By any measure, it had been a terrible summer. What’s the sense in continuing to struggle? Aside from losing two previous chicks, her mate disappeared several weeks ago. They should be raising their young together.

After 5 or 10 minutes — but it felt much longer — she finally set off exploring the pond. Unfortunately, she headed out opposite the direction her chick went. There was nothing we could do to tell her to go the other way. She called as she approached a thick patch of grass at the west end of the pond — the first time I had heard her voice — but there was no reply from the chick.

She casually searched the rest of the pond. She demonstrated none of the speed and purpose she had exhibited while hunting. She stopped a few more times to preen. She caught another fish for herself.

There were other things to photograph at the pond. Three raccoons weaved through the grass and briefly put their paws in the water, posing with their reflection. Red-eared sliders perched on various logs throughout the pond basked in the sun. An osprey flew by. A kingfisher hunted.

But mostly the other photographers and I felt lost. When you think you’ve documented the last few moments of a creature’s life you don’t feel like celebrating.

It’s now been an hour since we last saw the chick. The mother was back swimming around the wood debris — the same area she was hunting in when the chick disappeared. One of the photographers thought she saw something in the water near her. I squinted, but the distance was so great, I couldn’t tell what it was. I added a teleconverter to magnify the power of my lens and looked again.

It was the chick. It was alive.

It seemed odd at the time, but the mother left her baby yet again. Was she completely oblivious to what it had just been through? Moments later, she returned with a fish. She helped the chick eat, which tried to crawl on her back after swallowing the food.

The baby bird looked spent. It was caught in a new struggle: the difficult task of getting out of the water. It tried using its beak to hold onto her tail feathers, but she kept turning around. It followed. Every time it established a grip, I could see its tiny legs flail as it was looking for traction to walk up her back.

Finally, it found success and it disappeared again — this time to the safety provided under her folded up wings. As she started swimming toward the nest, the chick’s head emerged just behind her neck. 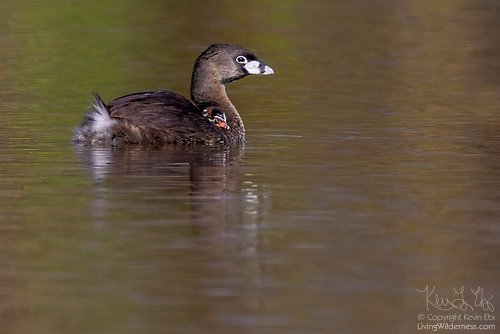 This was another sign that the chick was absolutely exhausted. When I’ve seen baby grebes hitch rides before, they’re usually high on the mother’s back and they look around as she swims. This chick was using its mother’s neck like a pillow. If the typical baby grebe is like a human kid at a carnival, this one was like a child asleep in the back seat on the way home.

There’s a lot of meaning in this image, which is probably becoming more obvious now that you know the story behind it. The picture captures a tender moment, but I placed the sleepy chick at a point that viewer’s eyes would naturally gravitate toward. I also avoided the temptation to crop tighter. By leaving more water around them, I wanted to communicate that they’re on their own, but that they have each other.

They made it back to the nest safely and the chick is growing stronger every day. It was a rough afternoon for all involved, but it turned out to be a beautiful experience.