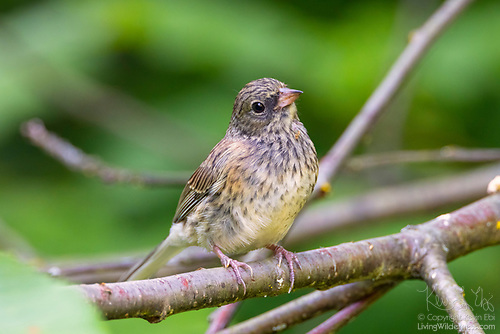 For the past month my grilling tent has been a nursery. A pair of songbirds, dark-eyed juncos, decided to try to raise a family in it.

I don’t have any great pictures to show you. Given that I am a nature photographer, that may seem odd, but their little lives are far more valuable than any pictures I might make.

The birds took advantage of a brief window of opportunity. I have a Weber charcoal kettle and a propane-powered pizza oven. When I use the pizza oven, I like to use the kettle grill as a stand for it. It gets hot and this allows me to keep it safely away from anything that might burn. But when I do this, the kettle lid is in the way, so I set it aside on the shelf of the grilling tent.

After dinner one night I was exhausted and I figured I would put everything away in the morning. Before I could do that, however, a junco discovered the lid would provide great cover for her nest. The moment I stepped outside, I saw her flying with some dried grass, briefly hovering under the lid until she could maneuver into the gap between its lip and the edge of the shelf it was resting on.

In the United States, it’s illegal to destroy an active nest of any bird that’s native to the area. I’m sure there were no eggs at this point. She was flying in with building materials every few minutes. But I let her be. My neighborhood has been a hotbed of development and I’ve been trying to turn my yard into a habitat that welcomes wildlife. I thought I was doing this with native plants, but if they wanted to use the grilling tent, I was just happy to have them here.

It takes about two weeks for junco eggs to hatch and another two weeks for the young to be big enough to leave the nest. The first couple of weeks were quiet; I saw the mother occasionally leave the lid to grab a bite to eat. The last two were sometimes frantic; both parents would take turns delivering mouthfuls of bugs to the young on the nest.

While I was curious about the new lives under the kettle lid — I could hear high-pitched chirps when I presumed they were hungry — but I kept my distance. As much I would have loved to have pictures of a nest full of juncos, it would haven’t been safe for the birds. The closest I got to the nest was during our recent spell of record-breaking heat. I used a few large sheets of cardboard to shade the lid; I didn’t want it to cook under there.

At least three of the young survived. I was working outside when I saw two of them leap from the kettle lid and scurry through the now tall grass into a new hiding spot in thick vine maples. I have a blurry picture of one, but it's not worth sharing. After two had fledged, I could still hear one tiny voice calling from the grilling tent.

Social media has been both bad and good for nature photography. There’s more pressure than ever to produce images unlike anything anyone has ever seen. Some photographers cave under that pressure and do things that are dangerous and harmful.

But it can also be a force for positive change. Unethical baiting practices and game farms that abuse exotic animals for even more exotic photos have been around for decades. While some professional photographers worked for years to try to end them, it was ultimately a persistent social media campaign that helped close one of the worst offenders.

These days, I’m seeing more good than bad, which is a positive sign, but what matters more is how the photographer behaves when no one is looking. When the only other creatures around can’t speak. When the subjects can tweet but cannot Tweet.

I got into nature photography because I wanted to share the wonderful experiences I had with others. This time, I can offer only words — not pictures. And that’s just fine.