Honoring those who help us see 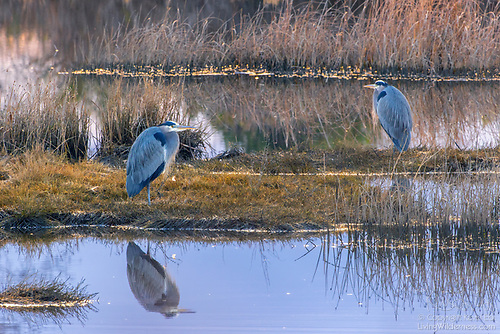 I don’t remember exactly when I met Bill Anderson, but I remember where: the Edmonds marsh. That’s where most people met Bill.

Some 150 years ago, the marsh was a thriving saltwater estuary — a valuable habitat for hundreds of different species as well as a corridor for salmon to return to their spawning grounds. It’s on its way back to that point now, one of the few such environments in the greater Seattle area.

Development cut the size of the marsh nearly in half, and a tide gate had cut it off from the source of its salt. When saltwater no longer flowed freely into it, freshwater cattails took over, dramatically changing it and the type wildlife that found it useful. About 30 years ago, saltwater was allowed back in — at least for much of the year — and the marsh is slowly transforming back.

Perhaps more than anyone else, Bill was there to document that transformation. Whenever I ran into him, he had two cameras ready to go for any kind of wildlife action. One was mounted to a powerful telephoto lens on a tripod. Another was around his neck and attached to a much lighter lens — allowing him to react more quickly if he needed to.

A decade ago, he and I were frequently alone, but if anybody else showed up he quickly set photography aside to talk to them about the birds they could see here. Over time we were less alone. It became more common to share the boardwalk with a couple of other photographers and birders. The marsh is now listed as the first stop on one of the Audubon Society’s Washington state “birding trails.”

Bill passed away this week. Thinking of him, I was inspired to return to the marsh. I was happy to find probably a dozen other people there on a weekday afternoon. A few were taking photos. Others were looking though binoculars for birds. Some were just out for a walk.

While it may be nice to have a place to yourself, that’s not usually how special places, like the Edmonds Marsh, are saved. The effort may start with one person, but it takes many advocates. And for that, we owe people like Bill our gratitude.

Email ThisBlogThis!Share to TwitterShare to FacebookShare to Pinterest
Labels: appreciation