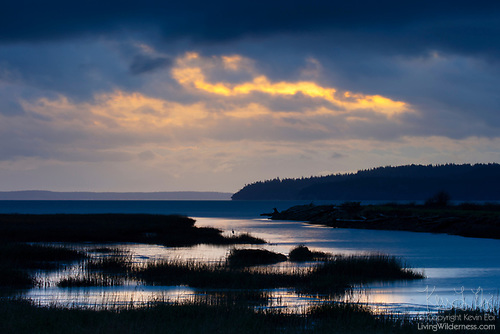 This photograph looks like dusk at a saltwater marsh, but that’s not what it’s really about. It is my first image of 2021 and it has a lot to say.

It began with a drive simply to get out of the house. I ended up on Fir Island in Washington state, an area where I know that snow geese congregate. But while they were honking, they weren’t really calling to me that day. I drove around some more and ended up at a trail that bordered an estuary. There, I immediately found my subject.

We all know that words have meaning, but colors and shapes do, too. I think blue is a very expressive color and that is the subject of this piece. This image is about emotion more than it is a particular place.

Its design originates from my experience at an exhibit of Picasso’s work. The exhibit a few years ago in Paris was entitled “Bleu et Rose,” and it explored the period of his work when his palette consisted largely of a single color — first blue and then pink.

His Blue Period work is somber. Several paintings are about the suicide of a close friend. Picasso said that loss triggered a period of depression resulting in this series of paintings. Some art historians believe that’s partially a marketing gimmick since he produced a few blue paintings before his friend died, but that’s not the point. When you see blue painting after blue painting you begin to feel “the blues.”

This image is ultimately about the juxtaposition of those two moods. Last year wasn’t easy for anyone I know. 2020 was a year of loss: a loss of life, a loss of opportunities. Blue called to me that day because I was “blue.” But I’m also hopeful for the future. The warm tones shining through the blue canvas acknowledge that things have not been easy — and they probably won’t be soon — but there’s reason to remain optimistic.

I made several versions of this scene over a half hour period, but this image has another element that adds even more meaning. If you look closely, just down and to the left of the center point, you will find a great blue heron. It was hunting while I was working to capture the landscape. In this one frame, however, it has its back turned toward us as if it’s watching the blue dissipate. I don’t photograph people, but this heron could be any one of us.

That is a lot for a little landscape to say, but I’m pleased it has a loud voice. After posting the image on social media, I got a few private messages from people telling me how it affected them. That was no accident, even if this image was unplanned.