Behind the image: Rialto Beach Driftwood 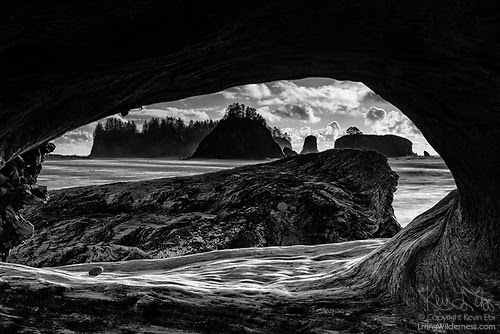 I create only a few black and white images per year. I don't have anything against monochrome; I just find that most of the time, color is a critical ingredient that helps me express what I want to say. But there are also times that color gets in the way.

That was the case earlier this year when I was creating images on Rialto Beach in Olympic National Park, a park that stretches from the ocean to a wall of mountains in Washington state. It’s a park of contrasts.

There are rough ocean waves and jagged sea stacks. Then there are the smooth beach rocks, worn down by the pounding waves. Farther inland, we’re back to the rough texture of old-growth trees, some of which are 2,000 years old. As we travel farther inland, we climb higher — to smooth fields of snow, cracked glaciers and sharp mountain peaks.

More than many other national parks, Olympic is hard to describe in a single image. Parks often have icons that illustrate their essence — Old Faithful in Yellowstone, the sheer vertical face of El Capitan in Yosemite. But with such varied terrain, Olympic doesn’t have just one.

To create an image that represents the park, I thought about a theme that brought the varied elements back together. It occurred to me that texture could be that theme.

Walking along the beach, I found a jumbled scene of driftwood and rocks and realized that it contained most of the textures of the park. One of the log, even laying on its side, was still taller than I am. There was a natural window near its roots, which I used to frame another log, the ocean, and a series of sea stacks and islands.

Ocean waves here are usually harsh, but I used a long exposure to smooth them to contrast them with the log. A darkening filter allowed me to use a longer shutter speed. An exposure of just over 3 seconds allowed me to preserve some of the feel of ocean waves while softening their edges.

The color of the scene also provided more contrast, particularly between the blue ocean waves and the sky, which was beginning to turn orange just before sunset. But as I evaluated the image, I felt that the contrast between those two colors overwhelmed the rest of the scene. Processing the image in black and white toned that down so the rest of the contrast could come through.

Creating an image that stands as art is a deliberate process. Occasionally, I find I have to give up one of my favorite tools — color — to allow my real message to shine.