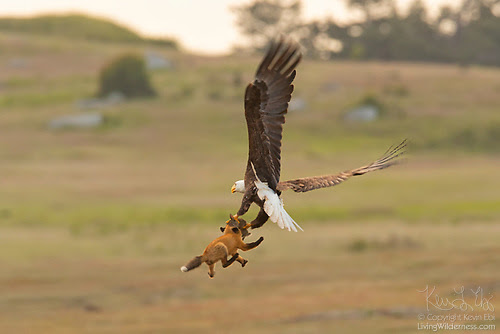 One of those new images is at the top of this post. I captured just over 80 images during the 8-second midair struggle and so far I’ve shared about 15 of them — ten of which were on the original post. While I liked the strong diagonal line in this image, there was no question in my mind that the winning shot where the eagle’s wings frame the fox was the more compelling picture.

The other images in the series were designed to help advance the story by telling different elements of it. One of the most difficult tasks in photography is editing your images and knowing when to cut a “good” image. This image was cut because it competed with the main image and it didn’t add any additional context. (I did, however, turn all 80-some images into a time-lapse video.)


What happened to the fox?
I continued to get reports on the fox for several weeks after the incident and I’m happy to report that it was fine, even though the encounter looked horrific. It had a distinctive feature on one of its ears (even before its run-in with the eagle), so people were able to recognize it later.

I was surprised to hear that about a week after the original incident, the eagle tried to steal food from another fox. It wasn’t successful. The foxes learned something from the incident. As soon as they saw the eagle approaching, they warned the fox that it was targeting, giving it time to take evasive action.

A year later, the eagle is no longer trying to steal food from the foxes. Instead, they’re waiting for foxes to finish eating their dinners and then making off with the scraps.


The most common question
I did at least a dozen media interviews and in all but one of them one of the first questions was, “What camera did you use?” The question came up countless more times in various comment threads and personal messages.

For the sake of photography as art, I wish that we could get past that question. The implication is that the camera did most of the work. More troubling, it implies that you can’t make worthwhile images if you don’t spend a fortune. Both of those implications are wrong.

I got the image because I was mentally prepared. Before that encounter, I had spent years documenting bald eagle behavior. When I heard the bald eagle call and saw it heading toward the fox, I was certain it was going to try to steal the rabbit. It’s what eagles do.

If you want to capture spectacular images, stop obsessing over camera reviews and start learning a subject. I believe that great images tell a story. You can’t tell a story if you don’t know a story. No camera can do that for you.

That said, my lens was an original Canon 600mm f/4 IS that’s more than 10 years old. There are two newer versions of it. While I would be ever so grateful if Canon would sponsor me and give me the new version (it weighs half what mine does), I do wish that we recognized the people behind the cameras as the artists they are. We don’t begin stories about painters by writing about the brand of brush they use.


Speaking of comment threads
Against better judgment, I did read some of the comments about my image. While most were complimentary and some were heartwarming, there were a number that were downright brutal.

One used several expletives before blasting the image for being poorly-focused and amateurish. The blur of the wings is motion blur. The wings are moving faster than the camera’s exposure time. I often like to capture some motion because I think it makes the images feel more alive.

A surprising number of comments claimed the work wasn’t mine — that I stole it by taking screenshots from the work of a videographer. There is video of the incident captured by someone who was on a different part of the prairie. Obviously, the video and my pictures show the incident from completely different angles, but the threshold for starting an internet conspiracy theory is pretty low these days.

Exponentially more comments, however, claim that I faked the whole thing. One blasted Audubon for not “keeping it real.” She claimed the image was fake because the fox should have been hanging straight down. Well, here’s an image with the fox briefly riding on the eagle’s back. (The eagle dove with its talons forward and this illustrates its momentum and the force it used to bring its talons back.) 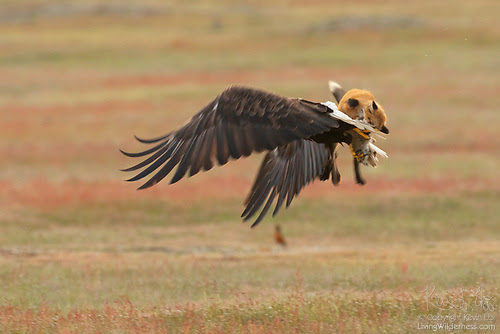 Another claimed that he could tell the image was fake by “analyzing the layers,” whatever the heck that means. Many people rose to my defense, but I wish that we would spend even half that effort fighting for things that truly matter. Endangered wildlife. Sensitive ecosystems. Water quality.

This time next year, my pictures of the bald eagle, fox and rabbit won’t matter. They will be replaced in our collective consciousness by the next viral thing that nature reveals to us. What will matter long term, though, are the choices we make today and the things we choose to fight for.


The value of the image
Some people have assumed that I will never have to work again. They figure that when you get an image like this that you’re set for life. They don’t mean any ill will by this comment, but I thought it would be educational to talk about the economics of nature photography.

When the image originally went viral, most of the publications that used it compensated me. Most originally asked for free use, but I generally turned them down. Nature photography is a job. People who do a job deserve to be paid.

My insistence on being paid meant that it didn’t run in as many places as it could have. That’s OK. I believe strongly that photographers should be paid just like everybody else who works at those publications. Just because the image now exists and costs little to nothing to reproduce doesn’t mean the image cost nothing for me to produce. I had to pay for my camera, for travel, the computer and software to process the image. And then there’s my time.

The good news it that the image ended up being my bestseller last year and drove new interest in my book, Year of the Eagle. I created a second edition of that book, updated with a new section devoted to the eagle, fox, rabbit incident. (The image also introduced my work to thousands of new followers, but I've learned that a fair number of them are only interested in eagles and foxes.)

Ultimately, however, I am not set for life. The money the image brought in was spent long ago on groceries and health insurance premiums. It carried me for a few months, but only a few of months. I appreciate your positive comments and your likes and shares on social media, but like most other artists, I need people to buy my books or prints. Media licensing fees aren’t great.

If you really want to help me to continue bringing you new images and fighting for the environment, please consider buying the Year of the Eagle book or a print of any of my images. And if there are other artists you admire, look at collecting their work too. It’s only through the support of our collectors that any of us are able to do this kind of work.

Just watched the video of stills, man that's nice work. As a news photographer of nearly 40 years, I would give an organ to get frames like that. To the people who think it's faked or stolen from somebody else's video, they obviously have no clue. They haven't spent hundreds of hours with their faces pushed up to a camera waiting for nature to happen.
Keep up the great work and know there are many of us who realize what was involved in making these frames.
And I'm stealing the bit about not starting off a story about a painting by asking what kind of brush...Excellent.