A gull, its shadow and a lesson in beauty 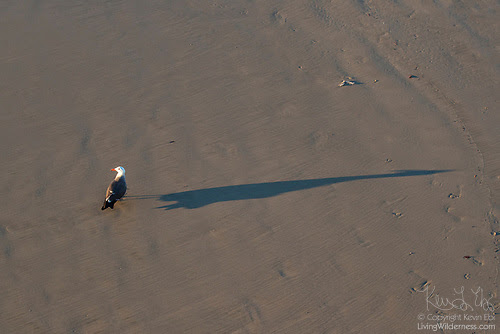 As I stood on the fishing pier at Venice Beach, Calif., there were potential photos in every direction. To the west, the sun was about to set over the Pacific Ocean. Surfers were riding the waves. To the east, clouds were beginning to take on color in the sky above the city of Venice. To the south and north, the shoreline led to the Los Angeles skyline and the Santa Monica pier.

Below me, a gull waited for its last meal of the day. Of all the possibilities, that may seem like the least interesting, but it had me captivated.

The one pictured here is one of four gulls that had claimed the beach just north of the fishing pier. The tide was just beginning to come back in and the gulls would congregate just above the waterline waiting for a wave to wash some food ashore. A wave would wash over their feet and as it retreated, they would scramble all across the newly wet sand looking for a bite to eat.

But the setting sun also drew a greater audience to the beach. Three of the gulls were willing to put up with getting wet, but they couldn’t stand sharing the beach with growing numbers of joggers and dogs. In the final minutes of daylight, just this gull remained. The others flew off.

As the sun crept closer and closer to the horizon, its low-angled light made the gull’s shadow longer and longer. I tried a variety of compositions — some a bit wider to include part of the ocean — but eventually decided on this one, just the Heermann’s gull, its shadow and the only empty stretch of beach that it could find.

I forget how it came up, but years ago an acquaintance of mine and I were talking about gulls. He knew I was a photographer and said, “I bet even you can’t be bothered to photograph them.” He was trying to be funny. His point was that for as much as I photograph, I must be running out of subjects, but even I wouldn’t be desperate enough to photograph a gull.

I had photographed gulls, many times, and it wasn’t because I was desperate. The thing is, I think it’s people like him who truly miss out on the beauty that is all around us. If all you focus on are the epic scenes, you miss out on a lot of it.