Waiting for the owlet 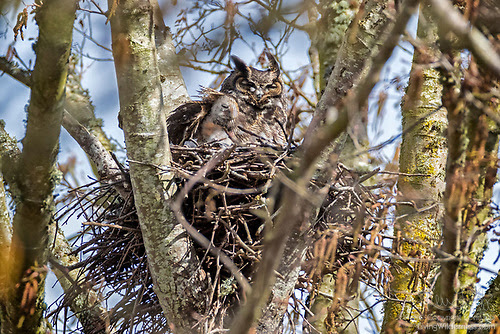 As I write these words, more than a quarter-million people are watching a live Internet video stream of a captive giraffe that’s about to give birth. Or so they think. April’s keepers have been saying she’s due for a couple of months now.

I’m not much of a giraffe-cam groupie. I’ve seen a few minutes of the video every now and then as I scrolled down my social media feeds. But as a nature photographer, I realized I have a lot in common with those people who’ve been hanging on for her every tail flinch.

This time last week I was in a wildlife area in the Skagit Valley of Washington state, my telephoto lens trained on a great horned owl nest. I was determined to catch a glimpse of her owlets.

I arrived early in the morning to catch the best sunlight on the nest. I knew there was at least one owlet on the nest. A week earlier, for just a few seconds, I saw the top of its down-covered head. What I desperately wanted was a good photo of the mother with one of her owlets clearly in view.

But nature operates on its own schedule and it took me nearly three hours to catch one of her owlets poking its head through her wing. (If you look really closely, you can see that the owlet is standing on one of its siblings.)

That’s the life of a nature photographer. The image at the top of this post took two trips and seven hours to capture. And that’s not unusual. Several years ago, I published a book on the growth and development of bald eagles. To get all the images that I needed for the section on how young eagles grow up and learn to fly, I worked for more than 1,000 hours over the course of three nesting seasons.

There are no short cuts. If I’m not set up and ready to go before the action happens, I will miss it. Nature is inherently unpredictable, so much of the job involves standing around and waiting, but being ready to act the instant an opportunity appears.

So if you’re one of the people who have been glued to the giraffe cam for the past two months, you have a better understanding of the “exciting” world of nature photography than most people have. I hope you don’t miss your shot.