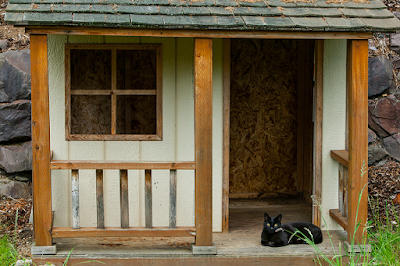 My wife and I have just learned that Cali, our faithful cat companion, doesn’t have much time left. Logically, I know that’s she’s already had so much more than most cats get. Almost a month ago she celebrated her 19th birthday. And they have all been quality years. 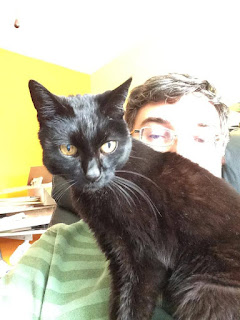 Just a few days ago, Cali reported to work as usual. She leapt up into my office chair, rubbed her head against mine a few times and then settled down into my lap to supervise the final edits to my new book. (She approved the squirrel image you’ll see in the Kings Canyon National Park section.)

Today, she can barely hold herself up and her trademark purr, more often than not, has been reduced to a few labored puffs of air. Her kidneys are shutting down rapidly. There is a slight chance that injections and blood transfusions could buy her a little more time, but we want her to be comfortable at home and not spend her last days in an animal hospital.

My wife has had Cali since she was just 6 weeks old. I didn’t get the pleasure of meeting her until she was 6 years old. At first, I thought she hated me. When I arrived at Jennifer’s house for one of our first dates, Cali ran from out of nowhere, tapped my leg and ran off. “Oh, she just wants to play ‘tag,’” Jennifer said.

Over the years, Cali added foil-ball soccer to the games we would play. She was the goalie, blocking balls I would toss from getting past her into our sunken living room. She would hide behind the step and bat the ball back as hard as she could, trying to get it past me.

A cynic would point out that our relationship is one of convenience — Cali’s convenience. I’ve always given Cali as much food as she wants, whenever she wants it. When shopping, I make sure to buy a wide assortment of wet food so she never has to eat the same thing twice in a row. She has her own playhouse in our backyard and another in a spare bedroom. But I also do not believe she takes her life for granted.

As I’ve been struggling with tremendous life challenges over the past couple of years, Cali has been one of the few sources of consistent comfort. She’s always been very independent, but she seems to get very clingy whenever I’m especially down. 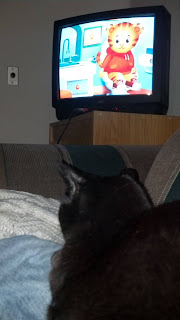 I also believe that in her soft head there is a lot going on that defies easy explanation. Cali loves the children’s cartoon Daniel Tiger’s Neighborhood. I used to watch the Canadian national news in the morning and Daniel Tiger came on immediately after. As soon as Daniel started speaking, Cali would come running, leap into my lap and watch the show. The moment it ended, she should hop down and go somewhere else, usually to a furnace vent.

This happened so often that I think there was something about that specific show that she just adored. She rarely joined me for the news. And she would always leave as soon as Daniel said goodbye. (Although, given that the next show was about math, I’m not sure if that means anything.)

Cali also loves the telephone. Whenever I was traveling and called my wife, Cali would jump up so she could hear. When she recognized my voice, she immediately started purring and then would rub her head up against the microphone. After several minutes, she would then get up and walk to the front door. She knew voice was mine, but also that I was not there. That is an amazingly abstract concept for a 6-pound pet to grasp.

When others would call, Cali’s routine was different. She would meow a couple of times at the phone and then go back to what she was doing. It’s a habit that could be annoying, but I do take delight in the fact she ended up on the radio when a reporter called me at home to talk about my national park stamp. She got one well-placed meow in. You would really have to be listening for it, but it is vintage Cali.

There is a fair amount about human inventions that she does seem to understand. For every door in our house, she knows which side it opens on. She knows you have to pull a door toward you to go out, but push it to get back in. 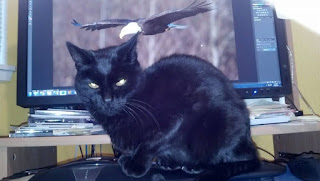 Of my work, she absolutely loved the bald eagle project. Large close ups of birds were her favorite images, though she also liked when I was editing video. She seemed to understand that my monitor wasn’t a window. She would watch calmly with great interest, as opposed to her time at the real window, which was marked with more tail tapping and occasional chattering.

Her knowledge of video screens was not perfect, however. I’ll never forget the first time we watched Planet Earth together. She got up and walked behind the TV as if to try to figure out where all the migrating animals were coming from.

I cannot prove Cali’s intelligence or that she had a true personality. I am clearly biased on this subject. Besides, cats don’t lend themselves well to the scientific method.

But just as I cannot prove that she has those wonderful attributes, no one has been able to prove conclusively that she — or other animals for that matter — do not. And I’ve had far too many experiences to give the doubters a free pass.

Consider the young bald eagles that I witnessed playing games that looked like “tag” and “catch.” Or the mule deer on the Washington coast who posed for an incredible portrait. She looked me in the eye, I told her I just wanted to take her picture and she let me approach closer to better frame her in the forest.

It is good to have doubts and to test assumptions. That is the only way that we ever arrive at anything resembling truth. But we also need to be aware that just because we cannot prove beyond a shadow of a doubt that something is so, the lack of evidence is not proof that it is not.

I have always had great respect for animals, but in my time with Cali and trying to figure her out, she has helped me see so much in the world around me. And her spirit will live forever in my work.

Well said Kevin. You know I feel about the animals.
Meg sends her love.
gretchen

What a beautiful tribute to Cali. Through your words, she taught me something too.