The legend of Niagara Falls 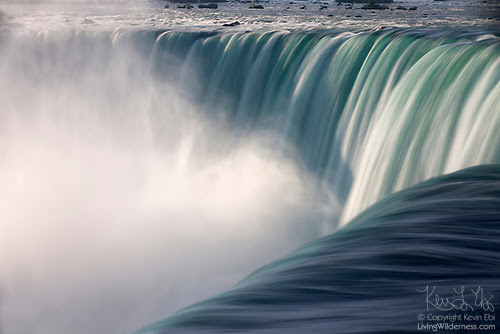 Niagara Falls is one of the most majestic waterfalls in the world, but where it stands today used to be an ordinary river. The waterfall is a tribute to the courage of a young woman and the spirit who helped protect her and her community.

Lelawala decided to leave her family after they arranged for her to marry a man she had no interest at all in marrying. She thought he was too old, too ugly and too boring. She put her canoe in the river and climbed in. She didn’t care where it was going; any place was better than the life her family had planned for her.

Her family never traveled. They didn’t need to. Natural springs surrounded their village. Crops were plentiful. So she had no idea what was ahead. And what was ahead was danger.

While the river was peaceful where she climbed in, up ahead were large rocks and powerful cascades. The rocks would certainly crush her canoe into tiny shards. But she never got that far. Thunderer, the chief of clouds and rain, saw her approaching. He flew down and, with his powerful wings, carried her and her canoe to safety.

Lelawala lived with Thunderer in his cave. Since Thunderer was also guardian of the harvest, he watched over the village and she could see what he saw. After she left, many people got sick. Most of the crops wilted. It was the work of a serpent.

The giant snake lived off people. Its fangs, big as an elephant’s tusks, pumped venom into the springs, poisoning the people. Lelawala returned home and warned everyone they needed to move immediately to the shore of a vast lake where the serpent’s venom would be diluted.

But as they rushed from their village, the serpent appeared and began striking at them. Thunderer responded by casting a towering thunder cloud that launched lightning bolts at the snake.

One lightning bolt made a direct hit, but the serpent just shook it off. Thunderer hurtled another. And another. Soon the sky was filled with smoke.

After the smoke cleared, the villagers saw the serpent’s lifeless body and decided to drag it into the river, hoping the fast-moving water would carry it away. The serpent was so gargantuan that it took the entire village to move it. Once they finally got it into the water, one remarked that it looked like a mountain — a mountain that stretched completely across the river.

The river didn’t have much better luck moving the serpent. Soon water backed up behind it, finally spilling over, creating a stunning waterfall. Niagara Falls is curved like the crescent moon; that curve comes from the serpent’s back. And the thundering roar of the water is a permanent reminder of Thunderer’s help.

— Based on a Seneca legend