Can birds learn to be better parents? 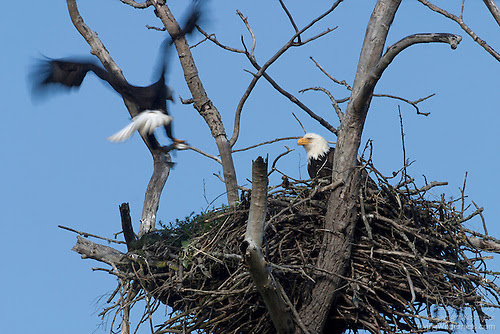 If you would have asked me a decade ago about how a bird knows how to fly, I would have regurgitated the answer I was taught in school: They are hatched knowing how. But after intensely studying a bald eagle nest for three years, I not only believe the young eaglets learn to fly, but that their parents also learn to be better parents.

A young bald eagle doesn't rush into its first flight. Contrary to popular belief, its mother does not kick it out of the nest when she is ready for it to leave. By the time a young eagle makes its first flight, she's hardly ever on the nest anyway.

Despite the fact that a young eagle is nearly as big as its parents after six weeks, it usually takes at least another month before it flies for the first time. In spends those weeks looking from the edge of the nest, sitting in the middle of the nest and furiously flapping its wings, and gradually working up to the point where it can leap from branch to branch, adjusting its technique to reach more distant branches safely.

We can't ask an eagle what's going on in its mind, of course, but if a human child was developing in a similar manner, we would say it was demonstrating curiosity and taking progressively larger “baby” steps until it was able to perform the task. Which sounds a lot like learning.

But one of the things that surprised me most over the course of the project, documented in the book Year of the Eagle, was that the parents appear to learn as well.

Here's my belief: If the parents operated purely on instinct, all things equal, any given pair of bald eagles should perform the same parental tasks the same way year after year. In essence, genetic programming should be like a computer program. If the input is the same, the output should be the same.

But at least at the nest I observed, it is not.

The young eagles I observed in my first year at the nest site took seemingly forever to make their first flights. They didn't start flying until mid-July, late by eagle standards, and didn't leave the nest for good until practically Labor Day.

They were unsteady in flight and seemed to crash more than land. And everybody knew when they were flying. The entire time they were in the air, they were screaming. Practice flights began at the first light of day, waking their human neighbors each morning.

There were some notable differences in the parenting styles year-to-year, the most visible of which was the amount of time the parents spent on the nest. In the first year, once the young eagles could regulate their own body temperatures, the parents spent very little time with them. The eaglets had plenty to eat, but the only time they got with their parents was during the brief food drops. The parents were on and off the nest typically in 15 seconds or less.

In the second year, the food drops often lasted a minute or more. Their time with their young increased even more in the third year. They were still breaking off pieces of food and individually feeding it to their eaglets long after they were capable of doing that for themselves.

There are a number of ways that this increased time on the nest could help their young be better fliers. It's possible that their presence results in both young eagles getting a fair share of food. When they don't have to compete as much for food, the young may be able to concentrate more on their flying skills. Or maybe somehow they're able to pass on knowledge as they're on the nest with their young. Whatever the case, they weren't doing in Year One of my project.

Others have uncovered anecdotal evidence that also suggests the parents learn how to parent. For instance, the PBS show Nature, in an episode called American Eagle, tracked a nest where the experience of the two parents differed. Bald eagles mate for life, but they will find new partners if their mate dies. In this case, the male had raised young before; the female had not. The male knew to walk on the nest with his feet balled up to avoid puncturing the eggs with his sharp talons, something he had to demonstrate for his new mate.

Scientifically, I cannot prove the eagles I studied learned to parent. I could not control all other variables, such as the weather or supply of fresh fish. But scientists have also yet to prove that the birds do not learn. And based on the observations of myself and others, before tossing around the term “instinct,” maybe we should study them and learn.

(Kevin Ebi is the author of Year of the Eagle, which documents a year in the lives of Pacific Northwest bald eagles. He will be speaking about what he learned at the community center in White Salmon, Washington, on April 18, 2014, at 8 p.m. More details are on his Facebook page.)