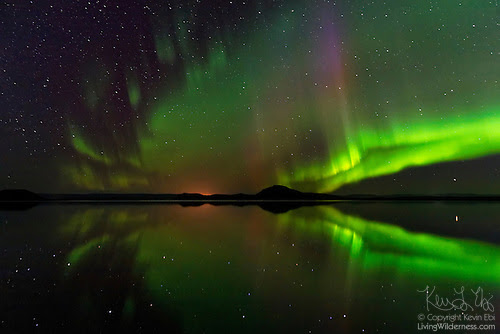 I’ve seen the northern lights a number of times in the North Cascades of Washington state, but when I was presented with an opportunity to see them near the Arctic Circle, I knew I had to take advantage of it.

Outside of Alaska and in years when the sun is particularly active, you may get a handful of chances per year to see the aurora borealis from northern states like Washington, Maine and North Dakota. The lights are gorgeous, but it’s not the full experience. The aurora circles the poles. If you’re close to the poles, the lights dance overhead. If you’re very far away, the lights are so low on the horizon that you may only get to see the top of the show.

I was in Iceland to photograph the inside of a volcano. I’ll save that story for another time. But while there, I repeatedly checked forecasts to gauge the probability of photographing the northern lights there as well.

To see the northern lights you need two things: an active sun and clear dark skies. The space forecast indicated there were two days during the trip when there was likely to be enough solar activity to result in an aurora. The weather forecast indicated the only place likely to have clear skies was on the opposite side of the country from me.

With 36 hours of notice, I drove up and over the middle of the country to arrive at the shore of Lake Mývatn, a name that sounds pretty unless you know Icelandic. Mývatn means “midge flies.” There are many of them and they bite.

I chose the lake because it was in the center of the patch of clear skies. The rest of the country was socked in. I did not plan to photograph from the shore of the lake. The flies are annoying, the wind is usually strong, and there’s a small village nearby. I was worried the “city” lights would ruin any photos.

My plan was to use Mývatn as a base for venturing deeper into the Icelandic wilderness, plans that were ruined when I discovered a flat tire as the sun was setting. There was no time to get it fixed. The lake was going to be my shooting location.

And then something wondrous happened. The wind stopped. The lake, which is normally quite choppy, was as smooth as glass. And then the northern lights appeared.

The show I witnessed wasn’t anywhere near record strength, but it was still quite dramatic. I could easily see the arc of the northern lights stretching from the western to the eastern horizon.

At times, the aurora borealis seemed to be as bright as the brightest stars in the sky and it was somewhat active. The arc would form waves and ripples across the sky. Pillars would occasionally develop and shoot straight up. I stood out in the cold for three hours watching them dance, reframing the camera and triggering the shutter when the display was particularly attractive.

The one thing I couldn’t see with my own eyes was the color. The northern lights are too faint for the color receptors in your eyes to work. You can tell that they’re green, but you can’t pick out the red or purple pillars and you can’t see the intensity of the green.

On one hand, the images I made capture more color and detail than I was able to witness with my own eyes. People would be inclined to say they photograph better than they appear.

To my eyes, however, the images come as close as anything to demonstrating the experience of the northern lights. The image may not perfectly represent the light registering in my brain, but looking at it now, it perfectly captures the experience. The image looks like what it felt like to stand there at the edge of the lake.

And that’s my goal as an artist.