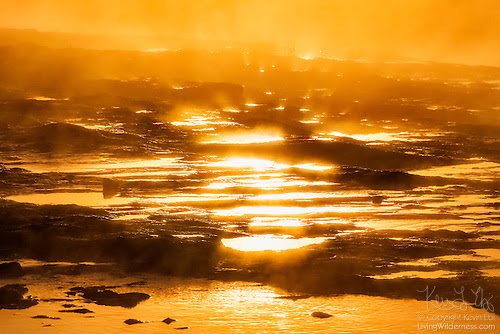 It’s impossible for me to pick a favorite part of Iceland, so I’m not even going to try. I’ve probably been to Geysir, however, more than any other part.

Just a few hours from the airport, Geysir is a volcanic wonderland. There’s a geyser, called Geysir, which only erupts after earthquakes. A few hundred yards away is Strokkur, a geyser that erupts every 5 to 10 minutes.

I’ve spent hours and hours photographing Strokkur. When it’s really active, it can shoot water nearly 100 feet into the air. And just before it erupts, the water swells into a gorgeous blue dome.

On this morning, though, the sun was shining, something I’ve rarely seen in Iceland. I photographed the geyser erupting with the golden sunlight shining behind. Then I noticed an even more amazing scene. The volcanic terrace downstream of the geyser had caught a lot of the runoff in dozens of mini pools, and each was reflecting the intense sunrise.

I waited for Strokkur to erupt once more, letting the mist block some of the direct sunlight. It was then that I noticed shafts of light shining up from the pools of gold. I fired off a few frames and was immediately blown away by what I saw on my camera’s screen.

The geyser is one of the most popular attractions in Iceland, but this morning provided me with a unique way of looking at a very familiar scene.

So beautiful. A sight most of us would never see without your keen eye to capture it. Thank you for sharing this wonderful image Kevin. Welcome back.