Letting nature tell its own story 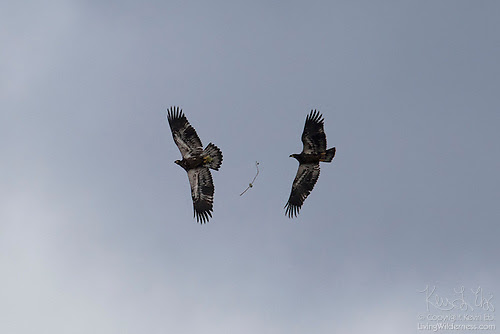 It has never been easier for a nature photographer to create an image that they imagined in their head. No Photoshop required.

Mix sun and moon position calculators with 3D topographical map software and I know exactly where and when to stand to capture the moon rising over a stunning mountain lake. Online networks of photographers and naturalists let me know exactly when the wildflower season peaks in any given location or the best time and place to go to capture any type of wildlife in its most dramatic splendor.

In nature photography, there is always — and will always be — some element of chance, but we have significantly minimized that. We have never been so close to the point where we can capture anything that we imagine on the first try.

I'm not so sure this trend is a good thing. On one hand, the technical quality of dramatic imagery has never been higher. On the other, what we capture is heavily determined by pre-conceived notions or what others have done. That's the part that bothers me. We're creating lots of amazing images that look great on walls and book or magazine covers, but we're learning less and less about nature. We're capturing incredible images that look the way we want them to look; they don't necessarily reflect how things really are.

For the past three years I've been working to document how bald eagles learn to fly, but this project started the same way any imagined nature photograph begins. Someone gave me the location of a photogenic bald eagle nest, I put its coordinates into a sun position program, and ventured out when the software told me the golden light would be at its best in the nest. I got an incredible image of the eagle family together.

With some spare time on my hands, I decided to do something that most nature photographers don't get a chance to do: I sat back and observed. The more I observed, the more I realized how much of what I thought I knew about the birds was wrong. In no time at all, I was venturing out to observe them even when the photographic conditions were far from ideal.

Let me share one of the most amazing stories from the project.

It's widely reported that young bald eagles are fierce competitors. In fact, the eggs hatch days apart, supposedly giving the oldest chick a path to easy domination should the food supply be tight. This, the theory goes, almost guarantees that the bald eagle parents will be able to successfully raise at least one chick each season.

There didn't seem to be a shortage of food the first season, so I wasn't surprised that I didn't witness any spectacular fights. What did surprise me was the amount of cooperation I saw between the young eagles.

During the first year of my project, one of the two young eagles took to flying fairly quickly. The other did not. It almost seemed to be afraid to leave the nest. It would exercise its wings and would hop to a nearby branch, but while its sibling was flying from tree to tree, it stayed put.

It's impossible for me to know what was going on in any of the “bird brains,” but it appeared to me that the stronger juvenile was concerned for its weaker sibling. It would fly only to the very next tree, even though by that point, it was capable of flying a few hundred yards. And it would scream back at its sibling on the nest.

It took a lot of screaming, much to the consternation of the human neighbors, but the weaker eagle finally flew to be with its older sibling. They briefly sat together on a branch, touched wings, and the stronger juvenile flew to the next tree and started the process over. I don't know how else to explain it: It really looked like a game of tag.

As the weaker eagle grew stronger, its older sibling stepped up the flight training. It landed on a tree behind me, clenched a branch with its talons and flapped its wings as hard as it could. At first, I thought it was using the tree like a treadmill, but it did this until it could break off a branch.

Carrying the branch, it flew past its younger sibling and called to it. A chase was on. The two birds circled the park, climbing higher and higher. When the birds were relatively close, the leader dropped its stick as if it was expecting the other eagle to catch it.

I never did get to witness a successful completed pass, but I don't think that matters. Over a couple weeks, the weaker eagle learned to fly as well as its older sibling, so well that it often beat its teacher to the spot where their parents delivered food. Consider that for a second. The older eagle helped train its younger sibling even though that increased its competition for food. At least in my mind, that somewhat challenges the concept of “survival of the fittest.”

The image of one young eagle seemingly playing catch with its sibling against a battleship gray sky will likely never grace the cover of a book or magazine. I doubt anyone will ever hang a print of it prominently in their home. But it's one of my favorite images from this project. That's because it is not a scene that I imagined. It's not even a scene that I would have imagined was even possible.

I figure I spent about 1,000 hours at that nest over three seasons. That's like working at a full-time job for six months. I could have used technology and my imagination to produce many more commercially appealing images with those hours, but I would have missed out on the wonder of nature and witnessing such remarkable stories. And it's that wonder that drove me to nature photography in the first place. I just lost sight of that in my drive to produce a lot of “wow” work.

The wildflowers are starting to bloom at Mount Rainier and there's no doubt I will use the resources available to me to produce the best images possible. But I'm no longer relying on those resources exclusively. I'm reserving more and more photographic time to simply letting nature happen without me imposing my vision on top of it.

I may come away with slightly fewer “wow” images, but many, many more “wow” stories.

I'm turning my chronicles from the nest and other Pacific Northwest bald eagles into a book called “Year of the Eagle.” If you're fascinated by the story, please pre-order a copy or share this with people you know who would be interested.