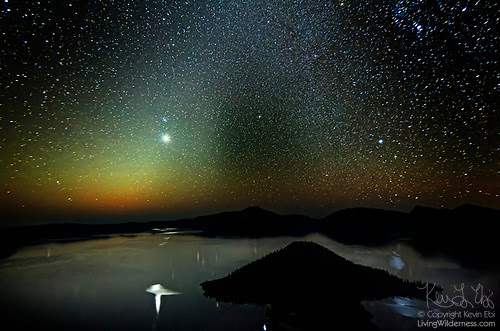 Every time a comet laps the sun, it leaves parts of itself behind. Solar system physics cause that dust to collect in a narrow plane. When the Earth is tilted just right, you may be able to see the sun light up the billions and billions of specks of dust.

When you consider the size of these specks, it's even more amazing that we can even see them. Scientists believe the largest particles are just three-tenths of a millimeter — about the width of the writing material in a pencil. The smallest are 1/100th that size. And each speck of dust is probably several miles away from its nearest neighbor.

While the Zodiacal Light is visible year-round in the tropics, elsewhere it's easiest to see on a moonless night right around the fall or spring solstices. That's when the plane of comet dust is in line with our equator. At other times of the year, it appears tilted toward the horizon, making it harder to see.

I wanted to use the Zodiacal Light as an element in a landscape, but realized quickly it was a difficult task. It may point straight up and down at the equator on the first days of fall and spring, but it's always tilted everywhere else. And it's increasingly tilted the closer you are to the poles. In my home state of Washington, there was too much tilt to make an effective image.

Even if you're in an ideal spot, you still need a moonless night and clear skies to see the Zodiacal Light. The absence of moonlight, however, is the opposite of what you need to photograph the land at night. That's why I decided to use a lake as the center of my landscape. It would reflect the lights in the sky allowing me to capture the night sky and the landscape at the same time, without needing any artificial lights.

I picked Crater Lake in southern Oregon because it was far enough south to see the Zodiacal Light, and points along its rim are high enough to give me a relatively unobstructed view of the horizon. Also, it's located in a fairly remote national park, which would minimize light pollution.

This year, the ideal moon phase nearly lined up with the fall solstice, so I made plans to get my shot. Unfortunately, I hadn't planned on a series of wildfires which blanketed central Oregon with a nasty haze. Crater Lake's elevation, though, helped, allowing me to shoot over the worst of it.

The image at the top of this post is a single 30-second exposure, one of many that I made over the course of two near-freezing nights along Crater Lake's rim. At least for right now, it's one of my favorite images that I've made. It's not just because it took a couple years and several failed attempts to capture the Zodiacal Light. It's also because both the sky and the land are connected with similar stories of natural change.

There are no comets bright enough for us to see in this image. What we see are traces of comets that once were.

Similarly, what is now Crater Lake was once Mount Mazama, one of the larger volcanoes in the Cascade Range. A cataclysmic eruption 7,700 years ago weakened it causing it to collapse under its own weight, forming a giant caldera. Crater Lake is evidence of a volcano that once was.

In this image, you see two large and separate systems in change, even though that change is too slow to see with the naked eye.