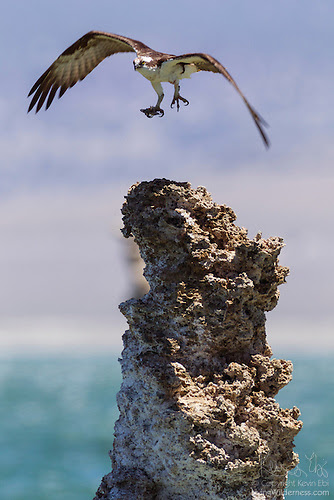 While walking along the shore of Mono Lake in California, I saw an osprey fly overhead with a giant stick firmly locked in its talons. Not only was I surprised to see an osprey there, I was stunned it would even nest in the area.

The scientific name for osprey translates to "fish eagle." Mono Lake, however, is so salty that only brine shrimp live in its waters.

Yet there the ospreys were. In fact, there were two nesting pairs, each of which had claimed one of the lake's tall limestone columns, called tufa (pronounced TOO-fuh), a few hundred feet from shore.

I was there to photograph tufa, but quickly switched to my strongest telephoto lens so I could photograph the birds. I had never seen them nest on something, well, "natural." Nesting ospreys are common in Western Washington, where I'm from, but I've only seen them on manmade features: old pilings, telephone poles and stadium light stands.

But as I continued to photograph them, I realized the scene I was photographing was barely more natural than what I see with the nesting osprey back home.

The tufa towers are natural; the fact we can see them is not. Minerals from springs react with the lake water to form calcium carbonate, a type of limestone. But that reaction occurs only under water. Therefore, the towers shouldn't be visible above the lake's surface.

They are because water that used to flow into the lake was diverted to supply Los Angeles. The diversions started in 1941. Twenty years later, the lake level dropped 25 feet. The drop reached more than 40 feet before conservationists won key legal victories in the 1980s and 1990s that started to turn things around.

The environmental consequences are too numerous to mention. One of the biggest was the threat to gulls that used to nest on an island in the middle of the lake. When the level dropped, that island became connected to the mainland, turning the birds into easy prey. The gulls haven't been back.

The composition of the water changed, harming the brine shrimp population. Winds blowing over the newly exposed lake bed caused serious air quality problems. And it goes on and on and on.

The lake level is still well below where it was in 1941 and it probably will never be that high again. Even when the restoration requirement is met, the lake level will still be down 25 feet. Today, it still has another nine feet to climb to even reach that goal.

Diverting all that water from the lake created a "new normal" for the wildlife there. Over the past 70 years, thick vegetation has grown to cover the old lake bed, which jackrabbits and tree swallows now call home. Ospreys now nest each year on the tufa towers that used to be underwater.

Maybe in 10 years, if everything goes well, some of those nesting sites will be underwater again.

Don't get me wrong: We do need to fix what we've done to Mono Lake, which is truly a one-of-a-kind place.  But we also need to realize there are no easy fixes for times when we take things too far. There's no way to fix things without disrupting the environmental balance for a second time.

Maybe that realization will help us be more careful in the future.