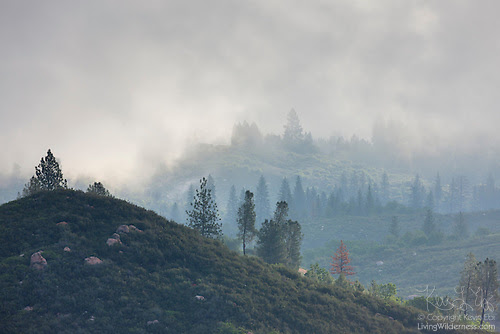 Someone who knows I'm a nature photographer, but isn't one himself, recently asked me what I do on cloudy days.

"On a day like today," he said, gesturing out a window toward the gray sky, "what would you photograph? Anything?"

There is a perception that bright sunny days are the best days for nature photography. And that's probably true if you're creating images for travel brochures. Who wants to go to a place that looks dark and stormy?

But I explained that sometimes I really like cloudy days. Cloudy days are perfect for capturing intimate details — patterns of nature, if you will.

Our eyes are incredibly sensitive and can see a wide range of contrast at once; cameras cannot. If part of the scene you want to photograph is in bright sunlight and another part in dark shade, it's tough to make an image. Without filters or a lot of post processing work, it's tough to capture such a wide range of tones without giving something up. The even light of a cloudy day evens the tones out into a range a camera can capture.

Weeks later, while working on a photography project in California, I realized that, at least for me, that wasn't the whole answer.

One of the things that fascinates me most about nature is that it's constantly changing. Like snowflakes, no scene is ever exactly the same twice. And with the help of clouds, that change can be immediately obvious.

Driving on the Rim of the World highway in California, I couldn't tell that the mountains of the High Sierra are growing. They are, but the forces of erosion grind away the new growth nearly as fast as it appears. Add weather to the scene, however, and you can easily see the forces of change.

After an especially stormy day, the clouds were beginning to break up. Tiny shafts of sunlight began to poke through thinner parts of the clouds, lighting up a few trees and tiny portions of the steep ridge where they were perched. One moment a particular ridge would be lit up; a moment later the patch of sunlight was hundreds of yards away. Strong wind would trap the fog in a pocket behind one ridge until it piled up and spilled over.

Every image I captured was truly unique. Even one captured seconds later was radically different from the frame before. Every moment was a once-in-a-lifetime moment.

Even if I visit the Rim of the World vista point in similar weather conditions on another day, I'll never get another image exactly like the one at the top of this post. Maybe I'll get a better image. Maybe I won't. It will be different, though. And that's what keeps driving me out into nature.

I agree, and it is always funny how people look at you when you tell them cloudy days are your favourite time for photography. :)