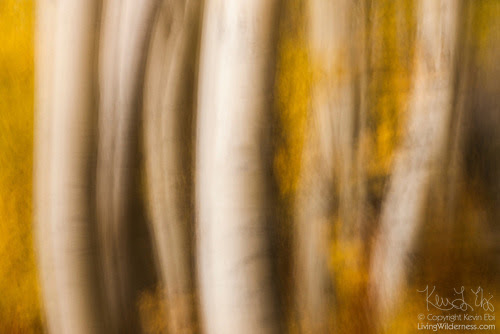 Why is it that some people feel the need to carve their name into everything? I realize the cavemen did it, but they didn't have Facebook and DrawSomething.


Whatever the reason, the work of a modern day caveman was squarely in the middle of a scene I wanted to photograph.


There was just one problem: Some dude carved his name into one. And just in case anyone would miss his two-foot-long scribble, he carved a giant box around it.


I looked for an alternate composition, but there wasn't one that was as good. And I liked the scene too much to continue hiking on.


So I decided to try an impressionistic approach, which involves panning the camera during a long exposure to blur away the sharp details, like the guy's name. It's not a new technique. Some photographers, including Freeman Patterson and William Neill have produced exceptional bodies of work using it. I don't use it often, but it seemed to be the best approach here.


It generally works best when what you like about a scene are strong, large lines or vibrant colors — or both. Depending on how bright the scene is, you may need to use a neutral density filter, which cuts the amount of light passing through the lens. Less light equals a longer exposure time.


Even though I would be moving the camera during the exposure, I left it on the tripod but loosened the ball head. That would help me move the camera straight up and down. The more irregular the movement during the exposure, the more details will be blurred away. I still wanted to see the sharp lines of the trunk, so I picked a straight up-and-down movement to complement the trunk lines — not an erratic movement that would blur them away, too.


You may need to experiment a bit with your exposure settings to get the right amount of blur. Generally, the longer your exposure, the more detail will be blurred away. I picked an exposure time of 2 1/2 seconds and got results I liked on the second try. It doesn't always work that quickly.


Looking back, this image is probably better in an impressionistic form that it would have been as a sharply detailed landscape, even if the guy hadn't carved his name into the tree.


There's a saying for writers that goes something like, "Don't use a $100 word when a $1 word will suffice." In other words, don't make something more complex than it has to be.


If you try to pack too many subjects or too much activity into an image, the overall impact may be lost. The viewer could be overwhelmed and not know where to look.


Try to think about what wows you and to compose an image that shows only that. You don't have to go impressionistic. You can often solve the same issue by cropping or using a tighter or different composition. As much as you can, eliminate everything that distracts the viewer from what you want them to see.


In this case, I was wowed by the shape of the trunks and the colors of the leaves. The texture of the bark, sharply defined leaves and the ground cover all would have been distractions. By blurring out the guy's name, I blurred out those distractions, too.


That doesn't excuse what he did. But just as he should have thought long and hard before he defaced the tree, if your images don't have the impact you experienced in nature, stop and think about what you want to communicate before you click the shutter.