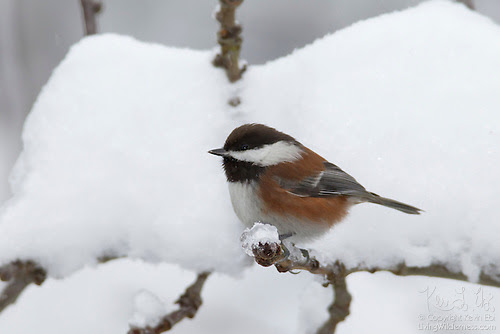 The black-capped chickadee is no ivory-billed woodpecker. Dozens visit my office window every day to feast on the free suet.

But just because they're common, doesn't mean they are not interesting. And a recent snow storm that, at times, had my yard buried under nearly 10 inches of snow allowed me to create some images that help tell their remarkable winter story.

That much snow is relatively unusual for the greater Seattle area where I'm based, but the black-capped chickadee is unusually well prepared for it.

The bird looks cold in the image, but it's probably not uncomfortable. It likely can't feel the ice it's standing on. Chickadees, another other tiny songbirds in the passerine family, have very few nerves and blood vessels in their feet. Because of that, they're not really bothered by the cold.

With food scarce and days short in the wintertime, they also have another key feature that helps them conserve energy: they can put themselves in a state of hypothermia at night. In fact, they can lower their body temperature from 107.6 Fahrenheit (42 Celsius) in the day to 86 Fahrenheit (30 Celsius) at night. By slowing their bodies down, they use less energy, but they still remain alert enough to be able to make at least a feeble attempt to get away from predators.

The snow storm here lasted a week. Early on, I captured images of chickadees on their icy perches. As the storm progressed, though, I continued to head out to capture images of the songbirds dwarfed by the towering piles of snow.

Chickadees may be fairly common, but they are tough to photograph. They're fast. They would flit around deep in my overgrown rhododendron, then briefly appear on a branch and race to the feeder. During the winter, chickadees travel in flocks, helping each other find food.

What worked to my advantage, however, is that they do not like to share the feeder. One at a time, seems to be their motto. When one was on the feeder, occasionally one or two others would wait patiently on a branch, in full view, for their turn to feed. They had a few favorite branches so I concentrated on those.

This required quite a deal of patience on my part. I would venture out for an hour or two at a time. Each of those sessions resulted in only a few minutes of productive photography.

Look close and you may notice a small highlight, or catch light, on the bird's eye. I used an off-camera flash to bring out the colors in the chickadee and add the glimmer to its eye.

When working some distance away from small birds, it's helpful to use an attachment that extends the reach of your flash. Attachable Fresnel lenses, such as the Better Beamer or the Flash Extender Kit from Harbor Digital Design (I use the latter), concentrate your flash's power into a narrow beam that travels farther. This image was captured with a 600mm lens, so the more narrow coverage area was not a problem.

One tip, however: When using a projected flash, it's important that your flash is at least a foot away from your camera. If the flash and lens are too close to each other, the light from the flash will be too intense as it reflects back into the lens. It won't harm the bird, but it will cause the bird's eye to look like a steel marble. In fact, this phenomenon — the same issue that causes red eye pictures of people — is known as "steel eye."

I got around this problem by placing the flash on its own tripod that was about two feet away from the camera. I used a cord to connect the camera with the flash, however, you could use wireless PocketWizard transceivers.

Technical challenges aside, the story of the black-capped chickadees and their adaptations to winter weather prove that you don't have to travel around the world to photograph fascinating animals. Sometimes amazing stories and photos are right in your backyard.

Nice article and good info about the flash extenders.

FYI, your photo is of a Chestnut-backed Chickadee, not a Black-capped Chickadee.