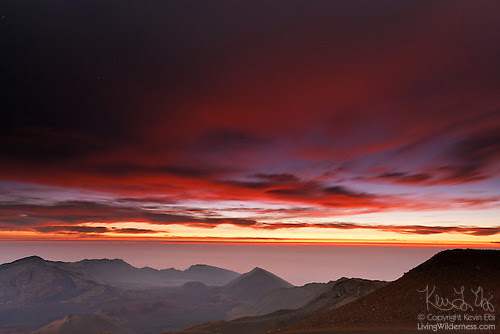 If you're out photographing a sunset and you're not happy with what you get, you can try again. In a half hour.

For photography purposes, there are two sunsets every night. The sun actually sets below the horizon just once, but the dramatic golden color on mountains and clouds happens twice. And it's that golden color that photographers typically care about.

Like most photographers, I used to set up for the sunset and pack everything away after the color faded from the sky. But one day, while on a long post-sunset hike back to my car, I saw the sky turn red again. It wasn't anywhere near as bright as the first sunset, but the colors were just as intense.

Over the years, I've learned that wasn't a one-time show. It happens every night. (Actually, it happens every morning, too. There's a bonus sunrise about a half hour before the sun actually climbs above the horizon.)

The physics are too complicated to explain without a few graphs, but in a nutshell, even with the sun is below the horizon, some of its light still colors the atmosphere. About a half hour after sunset, the last of that light fades away. The red wavelengths of light are the most rugged, if you will — they aren't as easily blocked by particles floating in the air — which is why the clouds appear red a second time.

The process is exactly backward for the sunrise. The red wavelengths are the first to appear.

This effect is particularly dramatic with mountains. Because they reach higher into the atmosphere, they will actually seem to glow at about the same time the clouds turn red again.

To photograph this phenomenon, you will definitely need a tripod. The image at the top of this post is of the first sunrise at the Haleakala Crater on Maui. This image was captured 35 minutes before the sun touched the horizon. The light level was so low that I needed a 70-second exposure at 400 ISO to capture it.

The light level may be low, but as you can see, the colors are dramatic. And on that morning, they were even better than the colors during the actual sunrise.

It's not often you get second chances in life, but nature gives them to you every sunrise and sunset.