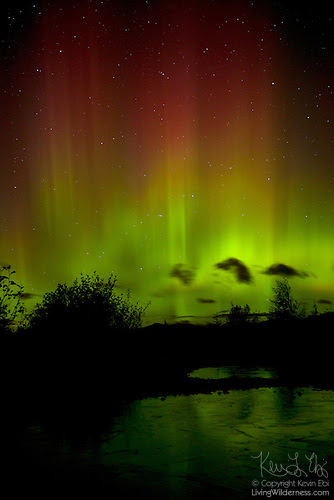 For the next couple years, you'll have a better-than-average chance of seeing and photographing the northern lights. Just this week, a large solar storm resulted in a northern lights display visible as far south as Georgia.

The northern lights appear when electrically-charged particles from the sun crash into Earth's magnetic field. The sun is just entering the active phase of its cycle, which will peak in 2013.

The activity is always strongest at the poles, which is why most of the northern lights images you see are taken from places like Alaska or Iceland. But if the conditions are just right, you can capture them a bit farther south. And there are a couple of prediction websites so that seeing them isn't purely by chance.

Still, there are no guarantees. I had been trying to photograph the aurora borealis for a couple years — getting up in the middle of the night, driving to a peak far from city lights and waiting in the cold — but repeatedly returned home with nothing. It took one of the largest solar flares ever recorded to produce this northern lights display over Washington's Central Cascades.

Washington typically gets a few light shows a year. The catch is knowing when the light shows will develop — and being lucky enough to have them develop on a clear night when little of the moon is showing. I use a couple of web sites to track the aurora activity and make sure I'm position to capture the lights any time the conditions appear ideal.

A website called Today's Space Weather gives three-day solar forecasts, similar to the weather forecasts you see on TV. If there's a big solar storm, it will tell you what day and time it will reach Earth.

When the sun is stormy, I frequently check a site from NOAA's Space Environmental Center. The site rates the aurora activity at both poles on a scale of 1 to 10++. To see the northern lights from the peaks in Snohomish County, Washington, where my images were taken, you need a northern pass reading of 10 or more. There's a chart that gives you the necessary level for cities throughout North America.

The problem is that the aurora levels can bounce around a lot. I've seen the levels jump from 7 to 10 in under an hour and vice versa. Generally, I head out any time the aurora levels have consistently reached 9 and 10 over a period of several hours, even if the level has since dropped to 7 or 8. That's probably why I had been met with so little success.

That wasn't the case, though, in late October 2003 when I was lucky enough to witness the northern lights two nights in a row.

It all started with word of a near-record solar storm. A mass of particles thirteen times the size of the earth erupted from the sun and began racing our way at 5 million miles per hour. At that speed, it took just 19 hours to travel from the sun to Earth. The particle storm was rated G5 — the most severe category. There have been just five solar storms of that magnitude over the past 15 years, and most of them did not collide with Earth.

Such storms are bad for satellite operators and for the electrical grid, but can potentially result in an aurora borealis display as far south as Texas. Sure enough, the NOAA site showed aurora readings of 10 for several consecutive hours. I took a nap that evening and planned to be halfway up Mount Pilchuck by midnight when the northern lights display tends to be most intense. The effort paid off.

The vertical composition you see above was the image I captured the first night. To your eyes, the aurora borealis is fairly dim. All I could make out was the green bands. I could see that the bands moved around a fair amount, but the color was not anywhere near as intense as it was in the resulting image. I couldn't see any of the red at all.

Because of my long exposure, the camera was capable of recording parts of the aurora that I couldn't see. I set my digital camera to simulate ISO 400 film and I used shutter speeds of between 20 and 30 seconds. If I used slower film and longer shutter speeds, the bands would blur and appear out of focus in the final image. They really do move around quite a bit. Putting up with a little grain was a fine trade off for capturing the bands of light. Even though I couldn't make out all the colors with my own eyes, the shifting bands were truly impressive.

The aurora borealis show didn't last very long. The peak activity lasted less than five minutes, but I was sure I had a picture that would work out. And given the severity of the storm, I decided to try to photograph the northern lights the following night from a different location. The image to your right was captured that second night from a road off the Mountain Loop Highway, east of Mt. Pilchuck. It's tough to see in the compressed Internet version of the image, but the big dipper is visible starting at the horizon in the middle of the image and stretching up and to the right. 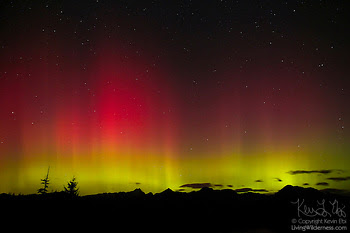