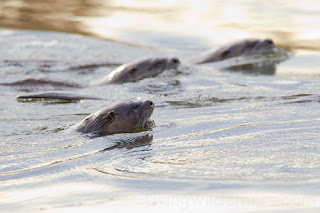 I still have no plans to turn this into an equipment blog. That said, I promised an update to my original post on the Canon 1D Mark IV once I had a chance to test new firmware.

I found the original firmware in my camera (1.0.4) did an amazing job tracking birds in flight. In fact, it has the best auto focus system of any camera I’ve ever used. But I ran into lots of trouble with slow-swimming ducks on a pond.

I found that any time just a slight change in focus was needed from one frame to the next, the camera would get a few frames in sharp focus, then “get bored” and then stop tracking for several frames.

I’m happy to report that the new firmware, version 1.0.6, completely fixes this problem. And it doesn’t appear to break anything else!

In my original post, I also wrote about problems where it seemed like the focus point was larger than it actually appeared in the viewfinder. I ran into this issue when photographing a cormorant. I selected an autofocus point that just fit inside the bird’s head, yet the camera was still distracted by the cattails in the background.

The 1D Mark IV includes a feature called Spot AF that works with some super telephoto lenses, like the 600mm I was using. If you change a custom function [C.Fn III-6], the AF Stop buttons on the lens (the little black buttons on the ring near the lens hood on my lens) change the focus point into a sort of super focus point.

While you hold down the AF Stop button, the camera will concentrate its resources on an area a fraction of the size of the regular focus point. It’s supposed to give you sharper focus on that concentrated area.

For me – and this may be because I’m using a tele-converter  – Spot AF doesn’t appear to make much of a difference. It also didn’t appear to help much in challenging conditions – like fog. I would have a still bird nearly in focus and then tried using Spot AF. It would still completely defocus and hunt through its entire focusing range.

I’ve yet to find a situation where it works any better than regular focus, which is okay, since regular focus is fine most of the time. Lots of people like the feature, however. If it works for you, don’t let me stop you.

When you’re tracking a bird in flight, it’s tough to keep the autofocus point on the same part of the bird at all times. There are several options that let you tell the camera whether or not it can use other focus points to help track if it thinks the point you selected slipped off your target.

You can tell the camera never to use another point, to use points on the left and right of your selected point, use points in a circle around the point you selected, or use all available points.

After a couple months of heavy use, I’ve found the surrounding option seems to work the best for me.

Using all points seems to be a good idea in principle, but I’ve found that at least with flying birds, the camera seems much more likely to get distracted by things that are closer to you. I tracked an eagle, keeping my selected AF point on the same spot of the bird, but the camera suddenly switched to a point that covered the tip of the bird’s wing. The tip of the wing was sharp, but the bird’s eye (usually your goal) was not.

That said, using all points worked incredibly well with a huge flock of snow geese flying toward me. It made sure that the closest bird was always in focus.

This is another feature that sounds incredibly useful. I, however, find it annoying and have turned it off.

As designed, the feature is supposed to give you a more even exposure in somewhat challenging lighting conditions. And it does that if you shoot JPEG or develop your raw files in Canon's Digital Photo Professional.

Problem is, it works by under exposing your images. That means if you use any other raw converter to process your files, you will have to work harder to adjust the brightness and tone to get the look you want.

Unlike many custom functions that have no affect whatsoever on the raw data, this one seems to deliberately under expose images. In my tests, the under-exposure is about a half-stop.

If you shoot JPEGs, by all means leave this feature on. It does a good job with a variety of lighting conditions. However, if you shoot in the raw format and want to use anything other than Canon's raw converter, turn the Auto Lighting Optimizer off via CFn II-4.

The latest version of the Capture One raw converter (5.1) now supports files from the Canon 1D Mark IV. I haven’t had much time to play with it, but so far it looks like it does a great job with color, tone, and detail. No surprise.

So that’s it. Have any tips of your own? Share them in the comments section.

And the next post will not be about new equipment!