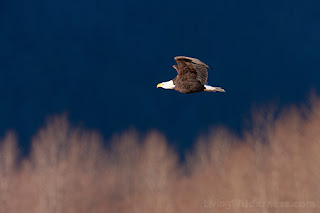 Quick! There’s a bald eagle across the river. What lens do you use?

To make art, we need to break ourselves from the habit of always answering “the longest lens I have.”

After writing a couple posts about new equipment, I figured it’s time to write about how some of the best images don’t necessarily come from the most expensive tools.

I’ve had the idea to write this post for a couple months. I posted the bald eagle image above on my flickr account. A woman who writes me every now and then left me a note saying that she never thought about photographing eagles since she has only a 300mm lens. An eagle would never fill the frame with such a small lens! She said my image showed her that you don’t always have to fill the frame.

She was easy to convince. Most aren’t.

Most photographers judge whether a wildlife image is good or not by how much space the animal’s head takes up in the final image. If the whole bird barely fits into the frame the image is good. If you used such a long lens that only the bird’s head can fit in the frame, it’s even better.

Problem is, their portfolios end up looking like a school year book for Bald Eagle High.

I never really intended to become a wildlife photographer. Most of my library is landscapes and images that tell the story of the geology of the land. But you can’t be in nature long without finding opportunities to photograph wildlife.

With a bag of lenses suited more toward landscapes, my wildlife images were rarely close-ups. They were mainly nice landscapes with an animal as the center of interest. I made the images that way because I didn’t have “better” equipment.

Then I discovered something: those are the kinds of images that publishers want.

The real eye-opening event came several years ago when I was photographing in the Badlands of South Dakota. I was there for the scenery, but spent a couple afternoons photographing a prairie dog town. Prairie dogs are generally skittish. These were even more so, since they were practically endangered. I got relatively close a few, but with my 400mm lens – my strongest – I was no match for another photographer there who had gear about twice the power of mine.

Since I was never going to get a frame-filling image of a prairie dog, I tried to make the best image I could with my equipment. I tried a different approach. I zoomed out a little and showed the plain with as many prairie dogs as I could fit in one frame. Suddenly, they all stood alert. A coyote ran through their town. I snapped a few frames and then packed up my gear and went for a hike.

A few weeks later, I heard from a major wildlife magazine. They wanted my prairie dog picture. It told the story of the growing prairie dog population and the dangers they still faced. They ran my image as a two-page opening spread. There’s almost no bigger accomplishment for a wildlife photographer.

I’m not telling you this story to brag. I’m sharing it because it’s a reminder that photography is art, and the best art communicates something, whether it’s a thought, an emotion or a story.

Sometimes you need a powerful telephoto lens to tell that story. Sometimes you don’t. Don’t let yourself fall into a trap that you can only take wildlife images with the most powerful lens you can (or can’t) afford.

Now a confession: the image that prompted this whole post was taken with a 600mm lens. With the wrong attitude, though, I never would have taken the image. The eagle was “too far away.” 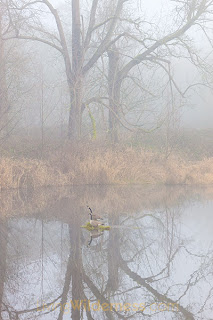 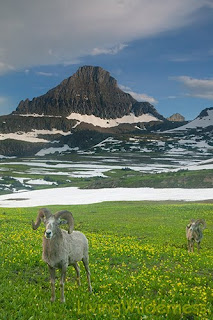 Hear, hear! I certainly don't hear that kind of thing enough. I totally agree. It is, of course, great to have a portrait of an animal or bird filling the frame, but sometimes its just better to sit back and let the surroundings tell a bit about the animal as well.
Cheers
Tobias