A sunset without the sunset 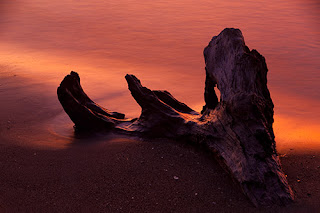 The sunset last night was absolutely incredible — one of the most dramatic I've seen in a while. I had a feeling early on that it was going to be good. I noticed thin wispy clouds high in the sky early in the afternoon and made plans to be down by the water at sunset in case the sky lit up.

This, obviously, isn't the image I imagined earlier in the day. After all, there are no clouds in the frame.

The sunset wasn't the issue. It was even more dramatic than I thought it would be. Rather, I believe that a sunset (or a sunrise) is often best used as an accessory. When I shoot at sunset, I don't go out to shoot the sunset itself. I use it as an element to add drama to my overall composition.

There is a difference.

That's not a bad thing; it just starts to feel the same.

Early in my career, I would have been incredibly proud to get an image of the blazing sky above the Olympic mountains. I got several frames of that last night, but that's not the scene that moved me most.

Standing at the beach, I was really struck by the interesting pattern of the partially-buried driftwood. I loved the shape. The driftwood was interesting by itself, but the sunset, which set the whole sky ablaze and the water, too, by reflection, added drama.

Sometimes the best part of the sunset is not the sunset itself, but what it does to the rest of the landscape.

Your photographs are beautiful and thanks for the tips on taking better photos. My photography is just a hobby, and I have a lot to learn yet and seeing/hearing how pros work sure helps!