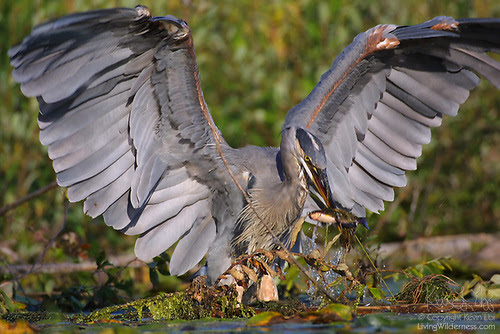 The vast majority of my images are taken with the camera mounted firmly on a tripod. For the image of a great blue heron catching a fish for dinner, however, I used a much different type of tripod: the side wall of an inflatable kayak that was beached on lily pads.

I had taken many rowing trips in the waterways of the Washington Park Arboretum in Seattle before capturing this image. Several herons live in the park and I've always been fascinated that the prehistoric-looking birds with six-foot wingspans are even able to fly. On one rowing trip, a heron flew over my boat - in its beak was a fish that was more than a foot long. I didn't have a camera with me that time, but I started thinking about how I could capture such an image the next time I was on the water.

My first concern was finding a boat I could use as a photographic platform. On that first trip, I was in a metal row boat that I had rented from the University of Washington. The waters around the marsh are relatively calm, but I wanted to find a boat that would absorb more of the waves. I settled on a two-person inflatable kayak. The boat's soft sides could be used as giant cushions, helping me to hold my long lenses steady. The room for the second person would give me plenty of space to stow my gear or to crouch down to hide from the birds.

Next, I needed to find a way to keep my gear dry. The waterproof storage containers at marine supply shops would protect my camera even if it fell overboard, but they were also heavy and bulky. My concern was keeping splashes from the oars from landing on the camera equipment. It's not airtight, but large Sterilite storage containers would do fine. (For my much smaller point-and-shoot digital camera, I use one of the disposable GladWare food containers instead.) For extra protection, I wrap a bath towel around the camera and lens. That towel is also helpful for wiping splashes off the lens before putting it away.

In spite of their size, herons tend to feel threatened the moment a person comes into view and will take off if people come closer than a dozen or so yards. Even with a 400mm lens attached to my camera, I needed to get a little bit closer than that.

The last thing I want to do is to disturb wildlife, so I approach very slowly and take pictures from a distance the animal is comfortable with. In the case of this heron, I started my approach more than 100 feet away, rowing the final 80-85 feet over a period of 15 minutes.

The problem with an inflatable kayak is that it tends to catch the wind and start drifting. To avoid that, I picked a vantage point that was on top of a number of lily pads. They weren't a perfect anchor, but they stopped the boat from drifting any great distance.

Once into position, I slid down, pulled the camera out of the storage container, and rested the lens on the side of the boat. The only thing the heron should have been able to see was the kayak and the end of the lens. Since I didn't plan to move until I got my shot, I took put the lens in the manual focus mode, focused on the heron and waited. By setting the lens to manual focus, the camera would be much more responsible when the time came to start snapping pictures. In automatic focus, the camera checks to make sure the image is in focus before it snaps any shots; in manual focus, it takes pictures immediately.

I spent more than two hours watching the heron try to catch fish. When it's getting ready to poke its head underwater, it moves its head around in a circular motion, giving me plenty of advance notice to get my finger on the shutter.

The camera I used to capture this image can capture three shots per second in a burst up to eight images. As soon as the heron started to plunge its head, I held down the shutter button. This image was the third in the series. That's one fast heron: It plunged its head underwater and pulled out this fish in slightly more than one second.