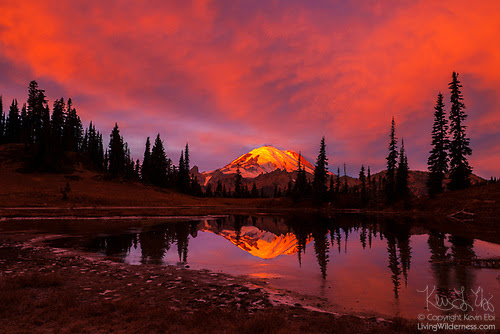 I captured this image — one of my most popular — on my first attempt, but I certainly wouldn't call it a lucky shot.

It required getting up hours before sunrise, finding my way to the lake in the dark, and waiting for more than a half-hour on the frozen ground for the sun to finally clear the horizon. But the resulting image was definitely worth it.

Tipsoo Lake, located near Chinook Pass at more than 5,200 hundred feet above sea level, had been on my list of potential shooting locations for quite some time. A good friend of mine has a poster of Tipsoo Lake (taken by another photographer) hanging in his living room. The poster shows Mt. Rainier at midday with its severely blurred and barely recognizable reflection framed by wildflowers. It's not that it's a terrible image - I always thought the location could be used to produce a much more inspiring photograph. So in late October, 2002, I set out to make an image of my own that would do the lake justice.

Since the lake is located on the east side of the mountain, I knew I was going to have to be in position at sunrise. At sunset, the sun would be on the other side of the mountain, turning Rainier into a silhouette on film and not giving me a reflection on the lake. It's tough to find the perfect vantage point in the dark if you've never been to a location before, so I decided to make a scouting trip to the lake in the afternoon, a couple days before I captured this image. What I discovered was that the lake used by the other photographer was not the lake that I wanted to use. This late in the season, the water level was relatively low and any position that would give me a good reflection would have too many trees blocking my view of the mountain. So, I started hiking, hoping to find a better view.

I found my vantage point about a half-mile away at Upper Tipsoo Lake, which as the name suggests, was at a higher elevation, allowing me to shoot over the trees that had blocked my view before. I then needed to figure out how I was going to find the vantage point in the dark. I wanted to capture the first light of the day hitting the mountain. I counted more than a half-dozen trails branching off from the parking area on Washington 410 and found the best way to find the trail I wanted to use was to count the number of roadside markers I passed walking from the parking lot. I memorized that number - four - and made plans to come back the first time it appeared the weather conditions would work out for a dramatic sunrise.

I got that chance the following Saturday morning. When I went to bed the night before, I noticed that ground fog was developing in Seattle. That would suggest that skies were clear above and I set my alarm clock to go off at 2 a.m. to give me time to drive to the pass. It was really foggy when I awoke, but had a couple cups of coffee and set out for the three-hour drive to the pass, hoping that conditions would be ideal 5,000 feet higher.

The conditions weren't quite as I had imagined them. I had thought there would be steam coming off the partially frozen lake, which would intensify the reflection. Instead, there was a thick band of clouds overhead that cut the top thousand feet off Rainier's peak.

I waited at the lake anyway and snapped a couple of pictures of the mountain bathed in alpenglow. Before the sun even rises, molecules in the air catch some of the sun’s rays and bend them around the earth, illuminating higher peaks while the land down below is waiting for daybreak. Snow, meantime, reflects more than 90 percent of the light that falls on it. It's a pretty scene, though not the one I had visualized. Making matters worse, a couple minutes later, the mountain faded to gray.

To get the dramatic sunrise that I had hoped for, however, I was going to need a hole in the clouds to develop behind me. Problem is, my view of Eastern Washington was blocked by Naches Peak, so there was no way for me to know ahead of time if I was going to get my shot or not. So I waited, even though I had doubts I was going to anything worthwhile.

Nearly a half hour later, a few of the clouds above my head began to turn red. Seconds later, the grass at my feet turned fiery red, too. In less than 30 seconds, the red skies raced all the way to the mountain. I took a dozen or so pictures, including a tighter vertical composition, in the minute I had before the dramatic light had faded. The resulting image was even better than what I had imagined I would get on the drive up to the mountain.

I hiked back to the car, a now completely gray mountain stood before me. As I pulled the warm Thermos of coffee out of the trunk, another photographer drove up and started to grab his gear. He didn't know what he missed; I didn't have the heart to tell him.