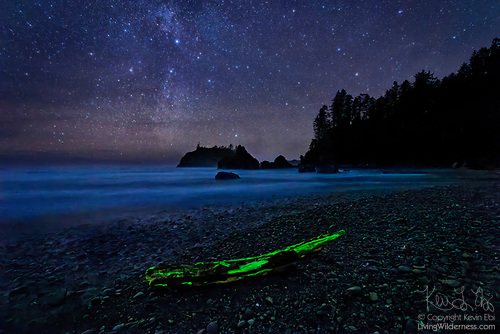 I’m always a little amazed at how bright it is at night — not just in cities, but even out in the wilderness. Even on a moonless night, even out in the middle of nowhere, it’s not completely black.

In the darkest skies, you can probably see about 2,000 stars. They produce enough starlight for me to be able to walk around. But recently on the Washington coast there was a second source of natural light and it came from the ground.

I was sitting on a log on Ruby Beach, located in Olympic National Park, gazing at the night sky while waiting for my eyes to adjust when I gradually began to see a faint glow next to me. There were large patches on a piece of driftwood that were emitting their own light.

The phenomenon is called foxfire. The light was generated by fungus growing on the decaying log. Certain types of fungi glow in the dark. Nobody quite knows why. The leading hypothesis is that the glimmer attracts insects, which then help the fungus reproduce.

Dozens of miles inland is a rainforest where this fungus originates. It’s an old-growth forest where decay is a critical part of the ecosystem. Powerful autumn storms cause the rivers to flood and rage, carrying fallen trees into the Pacific Ocean where some wash up on the beach.

The glow is very, very faint, but spectacularly beautiful. I was there to photograph it, but first I just wanted to enjoy the experience. Lit only by stars and fungi, the landscape I knew well felt entirely new.

When I was finally ready to take the camera out of the bag, I decided I wanted to make an image of the experience, rather than simply documenting the scene. For me, that meant creating a picture that was mostly dark. Between long exposures and the sensitivity of modern digital cameras, I technically could have produced a result that was closer to day than night.

And while the foxfire is the dominant subject of the image, the stars were equally important to me. I wanted to show it’s not completely dark after the sun goes down. This picture is about the world revealed by the natural night lights.

Combining the foxfire with the stars proved somewhat technically challenging, however. If I used a long exposure to make the fungus bright, the Earth’s rotation would turn the stars into tiny arcs. Another option would be to capture multiple exposures — a relatively quick one for the stars, a long one for the driftwood — and composite them later to bring out the best, but I feared that would diminish the contrast between the parts of the log that were covered or not by the fungus.

I decided on a single exposure, optimized for the stars, with hopes that the camera would record enough detail to bring out the foxfire later in Photoshop. I brought out the fungal glow by dodging it — manually brightening parts of the picture with a digital brush.

I also worked a bit to brighten the surrounding beach. Look really close and you can see a number of tiny green dots. These are pebble-sized shards of wood that also hosted fungi.

This image required more post processing than I normally do, but it’s true to my experience. The night is full of thousands of little lights.