Where are all the wildflowers? 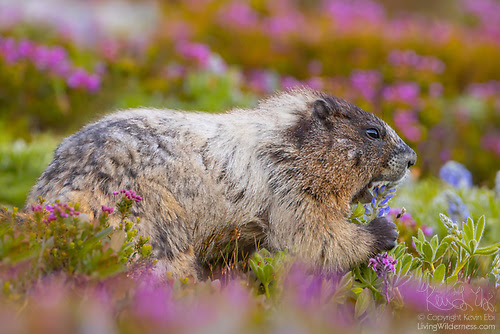 I have found it hard to get good action photos of marmots. Most of the time, they aren’t very active.

The hoary marmots I’ve seen in the Cascade mountain range spend most of the year sleeping. They hibernate for 8 to 9 months each year. They are awake only in summer when they scramble to eat enough to sleep through the next three seasons. Even then, however, I often see them stretched out over large rocks, napping in the sunshine.

When they are active, however, they can move like lightning and are tough to follow. They may look like squirrels that have taken up sumo wrestling, but at least for short bursts, they can have the speed and grace of a mountain lion.

This past summer, I had one of my best photography sessions with marmots. The day began at Paradise in Mount Rainier National Park in Washington state — a part of the park that is an absolute paradise when the mountain is visible and the wildflowers are in bloom. 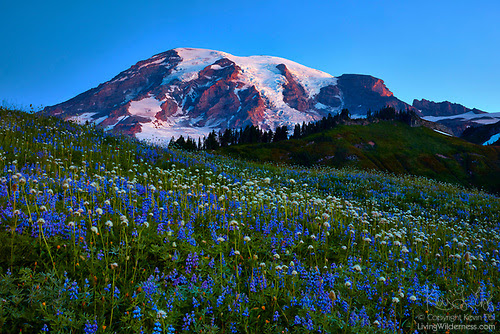 Before sunrise, I photographed a field of lupine with Mount Rainier towering in the background. Twilight offered a wonderful deep blue light in the sky and on the mountain. It was a perfect complement to the color of the wildflowers, which I illuminated with my headlamp.

I found interesting compositions in two different patches of wildflowers, but then packed up the camera and started climbing shortly after the sun cleared the horizon.

One of the things that I noticed was how small the wildflower meadow actually was. The flowers were fairly impressive along a quarter-mile stretch of trail — and then they largely vanished. At first I thought elevation was the factor. The trail climbs the mountain. It made sense to me that the higher you climb, the harsher the conditions, the fewer the flowers.

About a half-mile later, however, I discovered another culprit. Marmots.

I spotted one climbing down a hillside on the other side of a creek from me. I set up my camera attaching my strongest lens. It takes me a few minutes to get the camera ready. The lens is long and awkward. There’s a leather cover that protects the main element. It takes me a minute or so to untie the string that holds it safely in place. 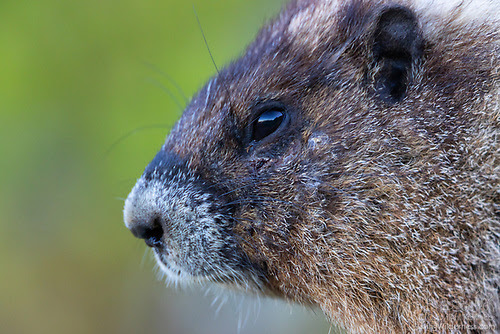 While I was doing all that I hadn’t noticed that the marmot was heading toward me. In fact, as I turned the camera on, the marmot leapt over my camera bag and started munching on a lupine a few feet away.

I couldn’t take a picture. The marmot was too close.

After that flower was gone, the marmot moved quickly around me, eventually finding a flower that was just far enough away from me so that I could take a picture. It seemed to like only the lupine flowers, bypassing the pink mountain-heather. And it moved fast. As soon as one flower was devoured, it sped to the next closest. 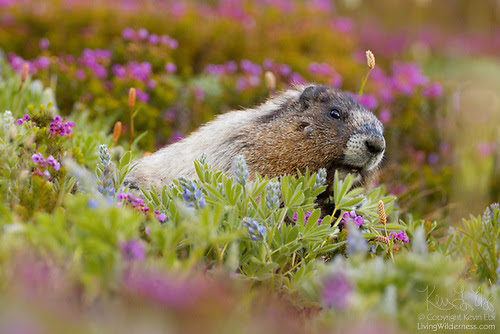 As it was feeding, several other marmots emerged from the rocks and began racing around the meadow in a feeding frenzy. I got only a few action photos before they all stopped to sun themselves on various boulders.