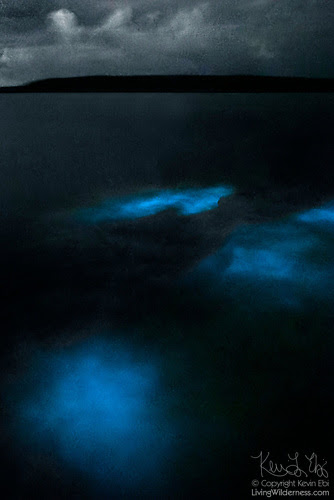 Whether you call it Mosquito Bay, Bahía Bioluminiscente or something else, the bioluminescent bay on the Puerto Rican island of Vieques is the world’s brightest. The Guinness Book of World Records says so.

The glow comes from dinoflagellates, which are not actually rare. They’re a type of plankton and are found in most ocean water. What makes Mosquito Bay special, however, is how concentrated they are there.

The bay has several unique traits. First, it has a very narrow opening to the Caribbean Sea. The dinoflagellates wash in and get stuck in the bay. Second, it’s lined with mangrove trees. As they decompose, they provide nutrients that allow the dinoflagellates to flourish.

The bay actually stopped glowing a few years ago, and oddly seemed to have been helped by the devastating Hurricane Maria last year. Today, there are about 2.4 million dinoflagellates in just one gallon of the bay's water — more than double the highest concentrations previously recorded.

Dinoflagellates are bright when they shine. As I paddled on the bay in a clear-bottomed canoe at night, I could see fish and rays swimming beneath me. It’s an effect that’s so weird it almost has to be seen to be believed.

If a dinoflagellate is bumped, it emits a bright blue light for about one second. It’s a self-defense mechanism that makes it look larger than it really is. Fish bump into them all the time as they swim so they are surrounded by this blue light. The fish look like ghosts.

My canoe’s paddle also triggered them. So, too, did my boat as it passed over them. They looked like shooting stars. I cupped my hand and dipped it into the water. As I lifted it out, it looked like glitter spilled from my palm.

While they are bright to your night-adjusted eyes, the glow is very, very difficult to photograph. I tried wading out into the bay — it’s quite shallow, for the most part — with my camera on a tripod, held still by the thick muck below the water.

My favorite image — and the one at the top of this post — was the result of a collaborative effort with a local guide who’s a senior in high school. We paddled to a spot that would allow me to get above the water.

It was hard to predict where the fish would light up the dinoflagellates, so he left me on shore and took the canoe back out into the bay, lighting up patches of water with his paddle. I choreographed his motions to try to best recreate the experience I had earlier with the fish, rays and skates.

This is not at all how I normally work, but Mosquito Bay defies normal nature photography techniques. And in the end, I think I came up with a dramatic image that really is true to the special experience of the bay.

This was a delightful post! I was trying to imagine how that must look while paddling. Amazing descriptions. Thank you and hello from Duluth, MN, where we have some spectacular water and opportunities to photograph wilderness!

Inspiring. Thank you for going through all that work to bring something magical to those who have never been.