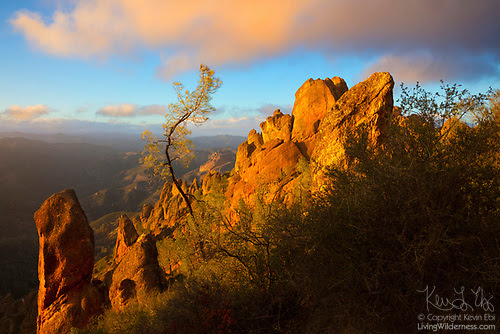 You often hear of artists talking about their careers in terms of personal growth. Over the nearly 20 years I’ve been photographing nature, my vision has certainly grown.

In the beginning, I was satisfied with images that made nature look as pretty as possible. Today, I try to make images that are pretty but also communicate how I felt when I pressed the shutter button. And in Pinnacles National Park, California, last month, that meant I had to find a way to photograph the wind.

Pinnacles National Park is a park with an interesting past. Located about an hour south of San Francisco, the park is comprised of part of a volcano that used to be several hundred miles further south. California is famous for its earthquakes. The plate movement that causes the quakes also fractured the volcano and continues to carry it northward.

Given the geology, the park contains a range of mountain peaks that seem to rise out of nowhere. A prominent ridge, known as the High Peaks, is flanked by miles and miles of flat land. The movement of the plates has also dislodged rocks, creating a network of talus caves at the base of the peaks.

I began my trip in the caves, where even in February, the weather was warm. I rolled up my sleeves and drank a fair amount of water to stay comfortable. In summer, I hear, that part of the park can be absolutely miserable.

But at sunset, I wanted a sweeping view. That meant climbing to the top of the High Peaks. At the summit, the change in weather couldn’t have been more dramatic.

It was immediately obvious I was underdressed. Strong winds made it hard to stand still and the legs of my tripod feel like ice. Just setting the tripod up caused my fingers to hurt.

You could also see the wind in the flight patterns of the condors. A pair flew back and forth along the ridge. As they flew toward the west, they inched along the peaks. As they turned back east, it was like they were racing.

And the view itself changed dramatically. A cloud that capped one peak might be blown out of the park a minute later.

The view was spectacular, but the wind was on my mind. And I wanted to create an image that captured that part of the experience.

As I stood at the very top of the mountain, I had a sweeping landscape and a sunset view, but I didn’t think it communicated what it felt like to stand there. So, I headed back down the trail 50 feet and found my image. The key element: a tree that had been bent by years of intense wind.

In this composition, there’s more vegetation than I had found at the true summit — brush that blocked a view of a part of the peaks. That’s a trade-off. But between the bent tree and the streaked clouds, this view more accurately describes what it felt like to be there.