The legend of the troll rocks 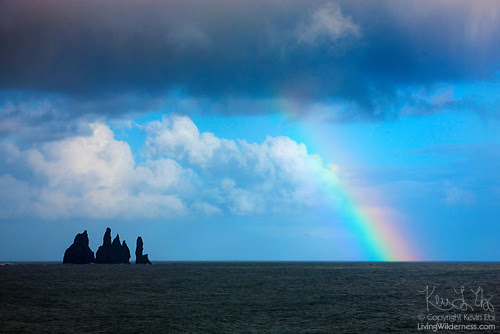 Iceland is a great place to be a troll. There are trolls all over the country, but you never see them — at least not in the flesh. Trolls must forever remain in the dark. Sunlight turns their skin to stone.

So they spend their days in mountain caves or under sea arches, venturing out only in the black of night. And in the rugged landscape of Iceland, there are plenty of places for trolls to hide from the sun.

Two trolls — Skessudrangur and Laddrangur — found their perfect home on the southern tip of Iceland near the village of Vík í Mýrdal. The village is surrounded by towering cliffs that offered shelter from the sun while providing easy access to the sea.

For Skessudrangur and Laddrangur, the sea was nearly as important as the shadows. They preyed upon ships traveling along the Icelandic coast. And they were very good at their work. They were among the richest of the Icelandic trolls.

At nightfall, they would scan the horizon, looking for any signs of ships. When they spotted one, they raced into the water, swam to the ship and then tugged it to shore. In a flash, they had looted the ship of all of its treasures and gorged themselves on its supplies.

Ship captains had few options to avoid them. If they traveled further out, they would be in the territory of sea monsters. They could try to avoid Vík at night, but the ocean is vast and impossible to cross in a day. If they managed to sneak past Skessudrangur and Laddrangur in the daylight, they would just be within reach of other trolls at night.

As their fortunes grew, Skessudrangur and Laddrangur became more and more confident in their abilities. Soon, they decided to start going after the largest ships, confident they could drag even them to shore as add to their treasure piles faster.

One night, the biggest ship they had ever seen started to sail into view. It was so large, it needed three masts to harness enough wind. The trolls couldn’t believe their luck.

Once they got to the ship, though, they finally understood what it meant to struggle. While they could get most ships to shore in an hour or so, this ship barely budged. But they weren’t about to give up. Their heads were full of visions of all the food and gold that must be on board.

After several hours of tremendous effort, the shoreline was starting to feel like it was within reach. But in their excitement over the riches, they had lost track of time. The sun was also coming into view.

As the clouds lit up, the trolls became frozen in place, turned into rocky reminders about the dangers of greed.

— Based on an Icelandic legend